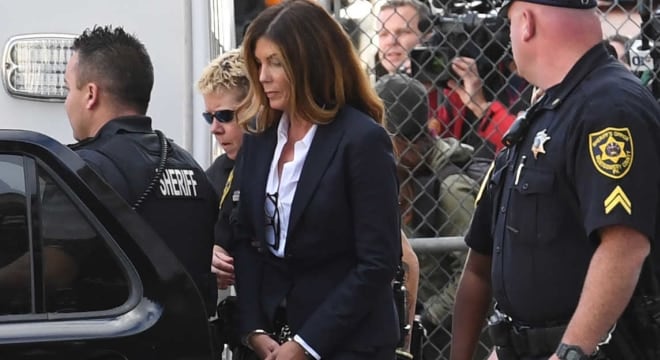 Kathleen G. Kane is led out of the Montgomery County Courthouse in handcuffs by sheriff’s deputies in 2016 (Photo: Clem Murray/Philly.com)

A Superior Court has affirmed the felony conviction of former Pennsylvania state Attorney General Kathleen Kane, who came to office with the support of gun control groups.

A unanimous three-judge panel dismantled the logic behind Kane’s appeal on a host of perjury, obstruction and conspiracy convictions late last month, The Philadelphia Inquirer reported. In the tribunal’s 32-page ruling, the court said Kane’s arguments that prosecutors had vindictively or selectively tried her case did not hold legal water with Superior Court Judge Anne Lazarus at times characterizing the logic in the appeal as “specious” and “meritless.”

Kane, 51, was both the first woman and first Democrat elected to Pennsylvania’s Attorney General’s office when she defeated her Republican opponent in 2012 in a narrowly decided race. A former Lackawanna County prosecutor, she worked for the 2008 Hillary Clinton presidential campaign and was in turn endorsed by former President Bill Clinton.

In 2015, she lost her law license and was convicted the next year of illegally leaking grand jury records and then lying about it, receiving a sentence of 10 to 23 months in prison, which was the subject of the appeal.

Kane came to office with the support of both national and local gun control advocates and in her brief time as AG moved to impose new restrictions on firearms and carry rights.

Benefitting from at least $600,000 in funding from former New York Mayor Michael Bloomberg’s Independence USA PAC that went to a series of statewide ad buys on the subject of gun control, the Democrat promised to tighten restrictions on concealed carry reciprocity agreements if elected.

“Kane received a perfect score on CeaseFirePA’s questionnaire,” noted the group in their 2012 endorsement. “In particular Kane has committed to a review of all concealed carry reciprocity agreements currently in place between Pennsylvania and other states, including Florida, and renegotiating or terminating those that do not meet Pennsylvania’s standards.”

After she made it to the office, Kane kept her promise and severed reciprocity with a number of states shortly after she was elected. Kane then added her name to a list of state attorneys general opposing federal right to carry laws. The move was celebrated by CeaseFirePA and other gun control groups.

When it came to Pennsylvania’s Act 192, which allowed member groups such as the NRA to stand in for individuals on lawsuits against local municipalities over gun control ordinances in excess of state law, Kane stood aside in 2014 when the law was itself challenged, declining to defend it. The law went on to be overturned.

Out on a $75,000 bail since her 2016 conviction, The Morning Call reports the Montgomery County district attorney’s office, which brought the charges against Kaine, is pleased with the ruling. The Commonwealth’s former top lawyer can appeal the latest decision to a nine-judge Superior Court panel and, finally, to the state Supreme Court.