Video killed the blogging star: How content creators are making a splash in the gun industry 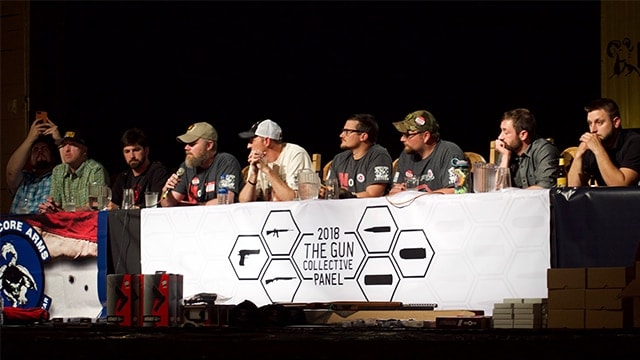 The Content Creator’s Panel hosted by The Gun Collective during the NRA’s annual meeting in May brought some of the biggest names of the YouTube gun world together for fans to meet, greet and get to know better. (Photo: Jacki Billings)

Much like the Buggles in the late 70s lamented radio’s death at the hands of music videos, so too has the print industry faced the undeniable, driving force that is visual media. While print use tout itself the go-to source for all things entertainment and informational, there’s no denying that print media has seen a decline in popularity over the last decade. As YouTube gun videos gained prominence and video content creators became household names, it’s left many wondering what will, ultimately, happen in the world of the gun media?

With more than a billion global users representing one-third of all people on the Internet, YouTube users watch a billion hours of video each day. YouTubers say its no surprise that this video based platform is such a success — especially among the millennial generation. As what Forbes termed the “first digitally native generation” millennials are consuming media quickly and on the spot using mobile technology like smartphones. The immediacy of YouTube and video content appeals to this generation.

Popular YouTuber Sootch00, boasting well some 660,000 subscribers, told Guns.com that while there is still a market for print with older generations, the millennial generation doesn’t want to wait months to read about new guns or gear. “The older generation still relies on print media but the younger generations are going away from it,” Sootch00 said. “I can receive a new item and have it on video within a couple of days, while print media takes over a month or more to get the same information out. Then consumers have to wait for it to arrive in the mail or pick up a copy at the store. With video, they can access it on their phone.”

Gun Drama Johnny at 180 Second Ideas seconded Sootch00’s observation, noting that the younger generation isn’t willing to wade through paragraphs upon paragraphs of dense text to get the information they seek. “People are visual. People are fast. Millennials do not read. They want bullet points at most but they’re never going to read a full paragraph,” he said.

Mike of Garand Thumb fame told Guns.com that video tends to be more successful because it has a familiar feel to the audience, one that we are conditioned to accept and prefer from childhood. “Visual and aural learning is the way many in the US were conditioned to learn — i.e. classroom setting — as a result YouTube with its sometimes classroom-like setting appeals to this audience. Throw in some cinematic elements and it feels like class and a movie mixed together. These are familiar elements and help people absorb information well,” Mike explained.

Jon Patton runs The Gun Collective, a YouTube channel that outputs a multi-faceted look at the industry. From product reviews to news to legal briefings, TGC has proven itself a powerhouse entity in the world of content creation. Most notable, TGC is known for its approach to the industry, often bringing aspects together to give the gun world a community-like feel. Hosting the Content Creator’s Panel for three years in a row at the NRA’s annual meeting, Patton said the appeal of YouTube and visual media is linked to that sense of community and familiarity.

“It’s way more personal because (with video) you’re seeing someone’s facial expressions, their emotions. You can read their body language and obviously in text there’s no way to get that. You have to work to paint a picture in someone’s head. Whereas, me, I make a weird face and somebody gets it that I’m being snarky,” Patton said. “These people know me and they know me every week. They know what I like, what I don’t like, what I’m gonna say about a product often times and I have no clue who they are because we’ve never met. We’ve only ever maybe talked in the comments … I think the whole viewer-video creator relationship is so so interesting and unique to video.”

The gap between print writers and video creators stems from a multi-faceted dynamic that, according to YouTubers, is mostly founded on misunderstandings from both sides of the pond. YouTube star 22Plinkster, who has made a career out of his YouTube presence, said that the most common misconception he encounters is that video content creation is quick and easy.

“I think the most common misconception is that those of us who do it full-time, we just sit home shoot guns all day,” 22Plinkster said. “Shooting guns is only probably about 5 percent of my week. To do this full time it’s 15 or 16 hour days, six days a week. You never get a break from social media. Ever.”

For Gun Drama Johnny, the distance between the two media outlets comes from the lack of understanding regarding the influence powering YouTube and its contributors. “My opinion is that print has no idea the number of clicks and the power, the collective power, of influence that the video folks have,” Johnny said. “The average YouTuber spends two hours a day on YouTube. There’s nobody that spends that much time in print, or very few people.”

Despite the prevalence of video and its immediate benefits, the content creators agreed that print isn’t likely to vanish completely. “I think it’s just a matter of people trying to understand both sides of the coin because we’re all trying to push the same direction,” Patton said. “I think there’s always something to be said about the written word. The ability to write something down is a special thing. It’s very innately human. So I don’t think we’re ever going to get away from that as a whole; but I think as far as gun content and marketing content, I think video is already transcending and pushing past what the written word has done in a very short period of time.”