The Tactical Pistol Case provides space for pistol shooters to store handguns when not in use. (Photo: MTM, Graphic: Jacki Billings)

The Tactical Pistol Case comes in three sizes, offering shooters the ability to tote store or tote multiple guns within the same case. The cases — featuring storage space for three, four or six handguns depending on model — deliver a dark grey form with lined MIL-spec foam and water-resistant O-ring seal. The design keeps dust and moisture away from pistols, says MTM. 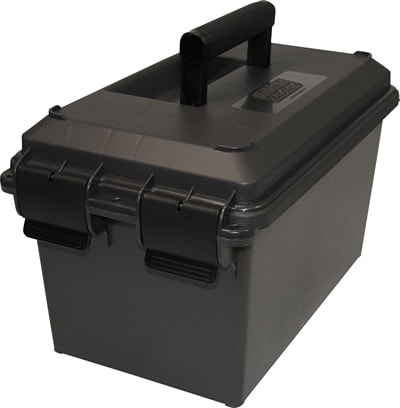 The cases come in a dark grey with a carrying handle for easier toting. (Photo: MTM)

“If you have multiple handguns, the new Tactical Pistol Case is just what you need to protect your investments during traveling or while in storage,” MTM said in a press release. “The days of bringing multiple individual handgun cases to the gun range are over!”

The TPC3, TPC4 and TPC6 Tactical Pistol Cases are available through MTM with prices starting at $34 for the smaller can and topping out at $49 for the largest.