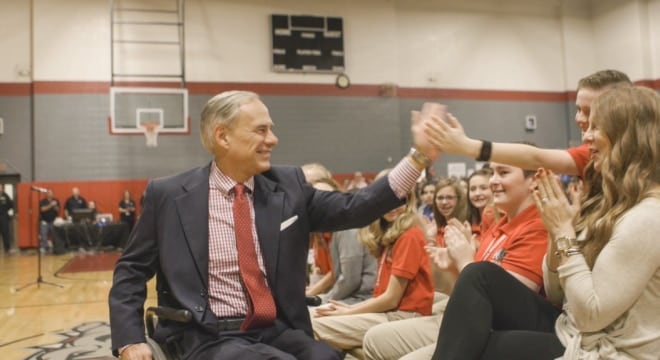 A group of 150 students across the Lone Star State wrote Gov. Greg Abbott to urge the Republican to keep gun rights in mind when considering action in the wake of a school shooting in the state.

Organized by March 4 Our Rights, an avowedly pro-gun student organization, the June 1 letter comes as a response to an open letter to Abbott signed by 41 Texas students and published as a full-page ad in the Houston Chronicle by gun control group Everytown.

“While we might lack the ability to finance a similar response, we do have a voice,” said the letter in part after slamming the Everytown-backed effort. “We are students of Texas and we want our parents, our teachers, and our law enforcement officers to have a voice in making our schools safer, not the gun control lobby.”

The March 4 Our Rights advocates urged Abbott to reject the calls from “organizations exploiting tragedies” and focus on “actual school safety solutions.”

Unlike the Everytown letter, which listed first names and last initials to represent its supporters drawn primarily from March 4 Our Lives supporters organized after the Parkland school shooting earlier this year, the pro-gun group published the full names of their signatories to include at least one from Texas’ Sante Fe High School, site of a shooting that left 10 dead last month.

“Like so many politicians cozy with the NRA, you have steadfastly opposed any reasonable measures that might protect us from gun violence,” said the Everytown letter, attacking Abbott for his approval of open carry legislation and a bill to allow for legal concealed carry on public colleges and universities in the state.

Abbott last week released his multifaceted 44-page school security plan in response to the Sante Fe shooting which was heavy on hardening schools, free trigger locks, and mental health treatment but light on gun control. The plan came after a series of roundtable discussions with a wide range of participants aimed to address mass shootings in schools and elsewhere. The Governor’s plan was slammed by gun control advocates who said the proposals did not “go far enough to fight the gun violence that plagues Texas.”

Hey we’re a 100% student-led movement. Most of our staff is in high school. We weren’t given millions from PACs and celebrities. We represent students nationwide, including some from Parkland and Santa Fe and we disagree with what you stand for. You do not speak for us.