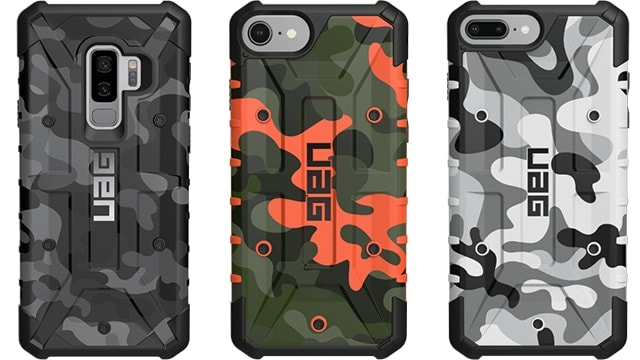 Urban Armor Gear is outfitting tactical warriors with MIL-Spec phone cases, designed to deliver rugged performance to the Galaxy S9 and S9+ as well as iPhones.

The special edition UAG Pathfinder SE drop-tested case series, was created with tactical folks in mind, says UAG. The lightweight construction permits users to trek with the smartphones without the added weight of a bulky case while scratch resistant skid pads and a screen encapsulate the phone for added protection. The Pathfinder series offers a camo aesthetic for those that prefer a little patterning for their mobile devices. (Photo: Urban Armor Gear)

The Pathfinder also provides oversized tactical buttons in addition to quick and easy access to the touchscreen and ports. The cases are both Apple Pay and Samsung Pay compatible and also support wireless charging.

“Our new Camo Cases available in Hunter, Arctic, & Midnight colorways, appeal to those who want to stand out…but not too much, while keeping the rugged & lightweight protection UAG is known for,” Michael McVerry, Senior Marketing Manager, said in a news release.

The iPhone model works alongside the iPhone X, iPhone 8, 7, 6 Plus and iPhone 8, 7, 6 and is available in Arctic, Midnight and Hunter color schemes. The Samsung variant is limited to the Galaxy S9 and S9+ in the Midnight pattern only.