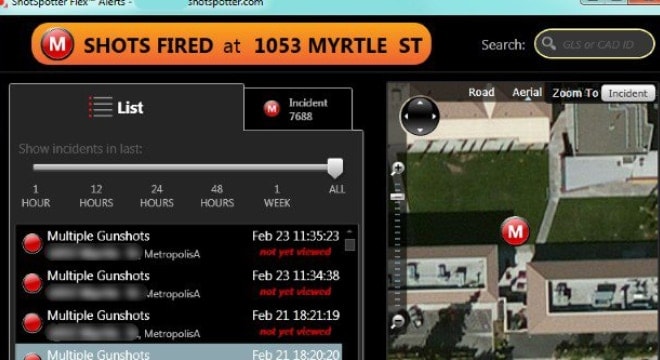 Screenshot of SpotSpotter Flex Incident Reports Portal shows details of a gunfire incident, including the precise location of the incident on a map, aerial or birds-eye view. Baltimore is the latest city to adopt the platform (Photo: ShotSpotter)

The nation’s most dangerous city is already logging gunfire through the use of a gunshot detection system that went live last week.

Baltimore announced last Thursday that the ShotSpotter system now covers five square miles of the city. On Friday, police said the system had captured four incidents of gunfire on its first night of use.

“We are confident that the implementation of this sophisticated intelligence gathering capability will enhance our efforts to get illegal guns and criminals off our streets,” said Mayor Catherine Pugh.

The $860,000 system of audio sensors tied to an Incident Review Center that analyzes the data is paid for through a $5 million donation from former New York Mayor Michael Bloomberg announced last December that included not only ShotSpotter but also more surveillance cameras and license plate readers. Baltimore was awarded $368,130 in federal grant money in 2015 to pay for a gunshot detection system but never went through with the deal.

Deployed to over 90 cities, ShotSpotter has seen mixed reviews.

In Cincinnati, police officials said last summer that their newly installed system had alerted police to more than 60 incidents of gunfire in one month alone, most of which had gone unnoticed or unreported. Officials in the Tampa area reported that the system’s first two years on the job as part of an $800,000 contract resulted in just 10 arrests after 769 alerts, although 19 gunshot victims were also assisted. In Chicago, the company’s sensors recently expanded to provide some 100 square miles of coverage, up from 3 square miles in 2012.

While at least one city in recent years terminated their pricey contract with the company, citing ShotSpotter didn’t help them make arrests or identify crime victims, others have found it more successful.

In April 2017, police in Fresno, California said the technology helped track a gunman on the move in that city, enabling his capture just under five minutes after his first shot was detected. The information, which is delayed less than 30 seconds from the time the shots are fired until an alert registers with the monitoring agency, was forwarded to officers in the field in near real-time.

Last year saw Baltimore’s murder rate the highest in the city’s history and at least 116 have been killed so far this year according to the Baltimore Sun. USA Today in February named Baltimore “the nation’s most dangerous city.”

Meanwhile, in other gun news from Charm City, Pugh told the City Council this week that the Police Department’s corrupt Gun Trace Task Force may have tainted as many as 1,700 cases they worked at the same time conviction rates under Baltimore State Attorney Marilyn Mosby dropped.