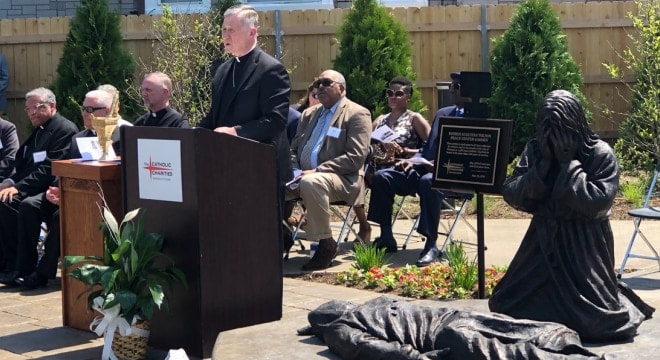 In recent weeks, the Roman Catholic Archdiocese of Chicago has expanded its gun program with the support of Cardinal Blase Cupich. While dedicating a new Catholic center featuring a sculpture of Jesus mourning a gunshot victim, Cupic took the opportunity to speak about gun politics. “We know that violence will not end in our society without a concerted effort to address its root causes,” he said.

At the event was one of the Archdiocese’s newest employees, former FBI agent Phil Andrew, who was hired in February to serve as the church’s inaugural Director of Violence Prevention Initiatives. Soon after taking the position, he told the Chicago Catholic, the church’s news organ, his job would concentrate on a variety of counseling and addressing root causes of violence including poverty, mental health care, and new mom’s training.

Andrew, the former executive director for the Illinois Council Against Handgun Violence, last week reportedly shifted the conversation when he talked to the National Catholic Reporter about gun laws, advocating for universal background checks, local licensing of gun stores and authorizing police to seize guns from people considered dangerous.

“The gun industry and its puppets make a lot of money selling guns. And they have a very effective lobby,” said Andrew. “But I think the public — in particular, students — are saying, ‘Enough is enough.'”

Cupich himself has been outspoken on gun control topics since taking the helm of the Chicago Archdiocese provides services to 2.3 million Catholics in Northeastern Illinois.

“The Second Amendment was passed in an era when organized police forces were few and citizen militias were useful in maintaining the peace,” said Cupich in a 2015 op-ed for the Chicago Tribune. “Its original authors could not have anticipated a time when the weapons we have a right to bear now include military-grade assault weapons that have turned our streets into battlefields.”

He later banned firearms in all schools, churches, or any other properties owned by the archdiocese.

In the aftermath of the Parkland, Florida school shooting that left 17 dead in February, Cupich reiterated his feelings on increased gun regulations, saying, “Let us make it clear to our elected officials that the weapons and ammunition that facilitate this carnage have no place in our culture.”

At the Father Augustus Tolton Peace Center in the Austin neighborhood, @cardinalbcupich praises @CCofchicago workers and volunteers for striving every day “to stop the cycles of revenge and violence by healing lives, building hope and connecting people with opportunities.” pic.twitter.com/56sFdybtMC