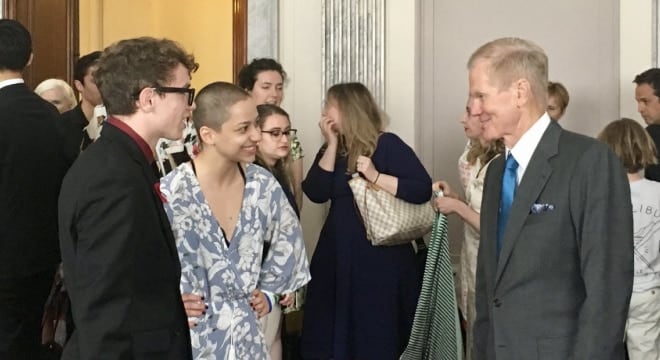 The Crime Gun Tracing Modernization Act introduced to the Senate last month would change how federal regulators track and trace firearms in the country.

Introduced as S.2974 just before Memorial Day by Democrats Bill Nelson of Florida and Patrick Leahy of Vermont, the measure is billed as bringing the Bureau of Alcohol, Tobacco, Firearms, and Explosives into the 21st Century by digitizing the currently archived paper records of gun transfers and compiling them into a searchable database.

“Americans would rightly be shocked and appalled to know that the ATF is prohibited from electronically searching sales records when tracing guns used in crimes,” said Leahy in a statement. “This bill is a commonsense crime-fighting reform to end this antiquated and nonsensical restriction. It would permit electronic searches of records that ATF already has access to but cannot quickly search due to absurd hurdles in the law.”

Due to restrictions on keeping an automated or electronically searchable database of gun transactions or gun owners– such as the one the government watchdogs smacked ATF’s hands over in 2016– when the agency gets digital records such as Excel spreadsheets from dealers going out of business, ATF prints them out and turns them into .Tiff image and adds them to stacks of yellowing 4473s and even older forms on microfilm maintained by the regulatory agency in a series conexes, vaults and offices in Martinsburg, West Virginia. There, at the National Tracing Center, ATF has some 800 million records and, according to Leahy’s office, adds an additional 2 million each month.

The bill, championed by gun control groups and Stoneman Douglas student activists, would do away with the boxes and storage units by converting the records into an instantly searchable database over a three-year period. According to the text of the proposal, it would be searchable by date, FFL license number, and gun specifics such as manufacturer, importer, model, serial number, type, and caliber or gauge. It would not be searchable by personal individual information.

Such a database has been supported by Everytown and others for years while gun rights groups hold to do so would be a defacto gun registry, which is outlawed under federal regulations. The Firearms Owners’ Protection Act, signed into law by President Ronald Reagan in 1986, specifically bans the establishment of any federal system of registration of firearms, firearm owners, or firearm transactions.

The measure has been referred to the Committee on the Judiciary.

So proud of @Emma4Change @cameron_kasky and all the Parkland students who have worked tirelessly to turn a tragedy into a nationwide call to action. It was an honor to spend some time with them today as @AMarch4OurLives was presented with the Robert F. Kennedy Human Rights Award. pic.twitter.com/2oGuDFMDMV

Thank you @SenBillNelson for helping us with the ATF bill. Nice speaking with you at the @RFKHumanRights pic.twitter.com/BKWzso2QQj