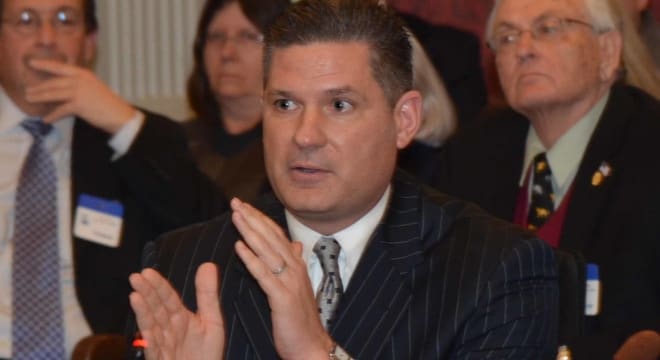 “These are bi-partisan supported, common sense bills that will aid us in putting an end to gun violence and helping New Jersey continue to be a safe place to live, work and, especially, grow up in,” said Assembly Majority Leader Louis Greenwald soon after the bills passed. (Photo: NJ Assembly Dems)

A massive package of a half-dozen anti-gun measures from the New Jersey Assembly cleared the full Senate on Thursday and are headed to Gov. Phil Murphy, who is ready to sign them into law.

The bills include a seizure measure to remove guns from those thought to be threats, a move to trim magazine capacity down to just 10 rounds, enhancing background checks, banning “armor-piercing” ammo and slamming the door on efforts by former Gov. Chris Christie to make it easier to get a gun license. Murphy, who ran for office last year on a ticket replete with promises to get tough on guns in a state that already has among the strictest regulations on legal firearms in the country, was pleased.

“On Wednesday, I’ll sign these bills into law, establishing some of the toughest gun laws in the nation,” Murphy promised on social media soon after the package was approved.

Republicans only hold 26 seats in the 80-member chamber, a margin that allowed Assembly Dems to bulldoze through the package with ease.

AB 1181 requires a healthcare professional to contact police if they think an individual they have contact with may be a threat to themselves or others. Authorities would then be obligated to check if the person has a firearms permit and evaluate obtaining an order to impound their guns from a local court. The measure passed with broad support even though the National Rifle Association cautioned that it would allow those such as marriage counselors and nurses to trigger a gun seizure without any accountability.

AB 1217 establishes an Extreme Risk Protection Order process, which does much the same thing as A1181 but allows family members and friends to petition the court for a one-year gun ban on those who they feel are at risk.

AB 2757 requires background checks on almost all guns transferred in the state with exemptions for firearms loaned among “immediate family” or licensed collectors. The move was panned by gun rights groups as duplicative because New Jersey already requires firearm cards for the private transfer of long guns.

AB 2758: Republicans came out in force to oppose this measure, which codifies a repeal by Murphy of Christie-era guidelines that made it slightly easier to get a firearms license in New Jersey. For Dems, their numbers carried the day and the measure passed 48-26 in the Assembly and 24-13 in the Senate along party lines.

AB 2759 swept the Assembly in a unanimous vote and aims to ban some types of ammunition on the pretext of keeping police safe. The move would adopt the federal definition of armor-piercing ammunition as state law and make possession a fourth-degree felony, a crime which carries 18 months in jail and a fine of as much as $10,000.

AB 2761 reduces the legal maximum capacity of detachable magazines in the state from 15 to 10 rounds. Those who currently own such mags would be able to keep them if they have a registered firearm and the magazine is permanantly blocked to comply with the law. Most Republicans opposed the measure, but in the end, it passed 45-20 in the Assembly and 23-10 in the Senate.

Gun control groups, who backed Murphy on his rise to power and were invited to roundtable discussions on gun policy that excluded Second Amendment or firearms industry groups, applauded the news.

“The package includes legislation that would keep guns out of the hands of dangerous people who pose extreme risks to themselves and their families,” said Nico Bocour, state legislative director of Giffords. “It also includes initiatives New Jerseyans have long demanded like closing the long gun loophole and limiting magazine capacity. We hope more states emulate the hard work done by the elected officials of New Jersey.”

It should be noted that Murphy last month appointed a lawyer who formerly represented Giffords as his “gun czar.”

The Association of New Jersey Rifle & Pistol Clubs, on the other hand, said that Murphy and his fellow Dems exploited recent tragedies in other states to advance a longstanding agenda to limit gun rights, one that will have little effect on crime and only goes after the state’s more than one million gun owners.

“None of the bills passed today will make anyone safer,” said ANJRPC Executive Director Scott Bach. “Lawmakers have squandered an important opportunity to make our schools safer and prevent those with serious mental health issues from obtaining firearms in the first place.”

Bach also hinted that the looming magazine ban, which has a 180-day implementation period, could find itself the subject of anticipated litigation.

On Wednesday, I'll sign these bills into law, establishing some of the toughest gun laws in the nation.