If encountering the Space Age MBA Gyrojet is like petting a unicorn, firing one is akin to bigfoot riding a unicorn, so be ready to nerd out.

In 1960, San Ramon, California-based nuclear weapons researcher Bob Mainhardt and arms designer Art Biehl came together to form MB Associates (after their initials) to explore modern rocket-firearm designs. The pair’s initial pet project was a small handheld flare projector that morphed, with an eye to military sales, into a rocket-firing family of weapons. These guns– both pistols and rifles– could be incredibly light (as low as 17-ounces), near recoilless, and powerful. In effect, they would be multi-shot rocket launchers that could be carried and fired by virtually anyone.

The Gyrojet was born, but the expensive niche guns (which retailed for over $2,000 when adjusted for inflation to today’s dollars) never caught on and marched boldly from innovative invention to curious collectible. Today, they are still about that price with those who seek them out while the dwindling supply of 50-year-old Rocketeer Automatic Rockets to fire from them go for up to $100 pop– which is why you hardly get any range time with a Gyrojet as it literally fires $100 bills. 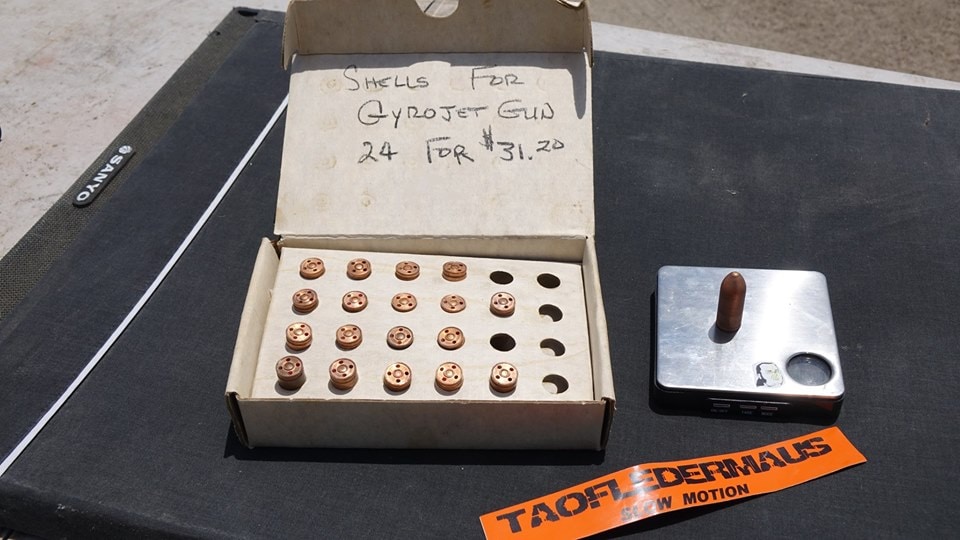 This is what box vintage Gyrojet Rocket rounds looks like. While they sold for $31 for a box of 24 in the 1960s, keep in mind that was about $250 when adjusted for inflation. Today these go for as much as $100 a round (Photo: Taofledermaus)

To fill the void for speculative minds with a bent towards neat-o ordnance, Taofledermaus was able to make contact with a Gyrojet owner willing to bring both his pistol and carbine out to their test ground and get some high-speed footage and analysis of the rounds in the above video.

For more information on the Gyrojet, check out Mel Carpenter’s site on the matter, as he literally wrote the book on them.