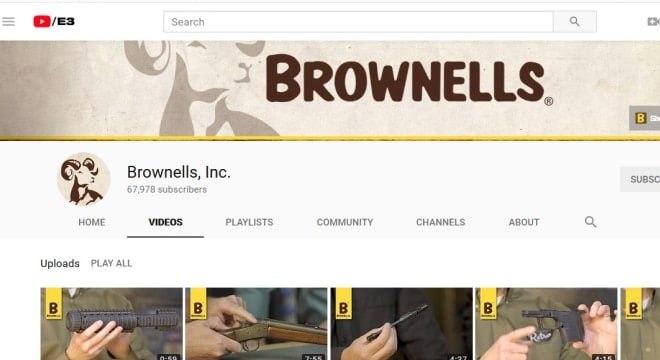 Brownells’ YouTube channel was back in service as of Sunday evening with some 22 million views logged across all videos. (Photo: Screenshot)

Online firearms retailer Brownells over the weekend had their popular YouTube channel terminated by the video hosting service owned by Google.

The channel, started 11 years ago by the iconic gun parts warehouse, had amassed over 67,000 subscribers in the past decade but according to the Iowa-based company, it was terminated by YouTube on Saturday without notice or explanation. Brownells fired back on social media, urging their fans and followers to contact the video platform and parent Google, “If you’re opposed to the continued attack on our community’s First and Second Amendment rights,” supplying various links to do so.

YouTube was then vilified across Facebook, Twitter and other social media sites for the move throughout the weekend by Brownells’ supporters who took the video service to task.  This amplified after news aggregator The Drudge Report focused on the story.

By late Sunday afternoon, the channel had been restored. While Brownells thanked their supporters for their help they said there had been no explanation for the channel’s abrupt cancellation.

Founded in 1939 by Bob Brownell who added gunsmithing services to his gas station and sandwich shop, by 1947 the company was sending out mail order catalogs with the motto “The First and Only Complete Gunsmiths’ Supply House in the World.” The next year, Bob was one of only two vendors to have a booth at the National Rifle Association’s annual meeting. Now pushing toward their 80th anniversary, the company stocks 110,000 different firearms, gun parts, tools, and supplies. Operating internationally but still family owned, Brownells expanded to a 200,000 square-foot warehouse and opened a 7,000 square-foot retail space in 2016.

The Brownell family have been longtime supporters of gun rights, participating in the NRA’s Round-Up and Add-A-Buck Programs in which customers are encouraged to donate a portion of their purchases to the Second Amendment member organization’s youth programs in addition to supporting NRA Day events around the country. A firearms museum named in honor of Bob’s son Frank, the second CEO and current chairman of the company, is located at the NRA’s Whittington Center. Elected to the group’s board of directors in 2010, Pete Brownell, the third-generation family CEO of the company, was named as the 64th President of the NRA in 2016, a position he recently vacated in favor of Lt. Col. Oliver North.

Brownells’ YouTube channel was in service as of Sunday evening with some 22 million views logged across all videos.