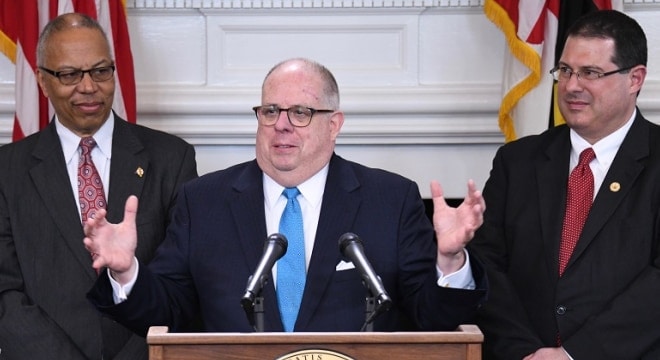 The class-action lawsuit, filed Monday against Gov. Larry Hogan in his official capacity, argues that the ban he signed into law in April is illegal when compared against both the U.S. and state constitutions. Maryland’s law regulating rapid fire trigger activators– defined as bump stocks, binary trigger systems, burst triggers and trigger cranks– is set to go into effect in October. The plaintiffs in the suit–Paul Mark Brockman, Robert and Caroline Brunger, and David Orlin– all own one or more devices subject to the pending ban.

The challenge is backed by Maryland Shall Issue and takes the state to task on several legal points.

First, they argue that a mandatory surrender of their devices without any compensation violates the Takings Clause of the Fifth Amendment as well as protections offered by the Maryland Constitution. Next, the lawsuit attacks that the only promise of legal ownership, that of federal approval under currently unwritten regulations on bump stocks and similar devices– one that the ATF has already rebuffed Maryland gun owners on– is a violation of due process protections.

Finally, the complaint makes the argument that the new law is badly written and so vague that it can’t provide reasonable protection to those who are unsure if their devices meet the definition of a rapid-fire trigger activator while simultaneously failing to give police, prosecutors and the courts enough guidance to enforce the law without being discriminatory.

A ban on bump stocks in Florida is the subject of a federal lawsuit on similar grounds.

The law passed 128-7 in the state House and 35-11 in the Senate and was opposed by the National Rifle Association at the time who characterized the move as “broad and overreaching.”

The plaintiffs are seeking for the court to declare a class consisting of all owners of banned devices in Maryland prior to the law going into effect and a trial to determine relief and damages to include compensation for their devices at fair market value plus interest, costs and attorneys’ fees.