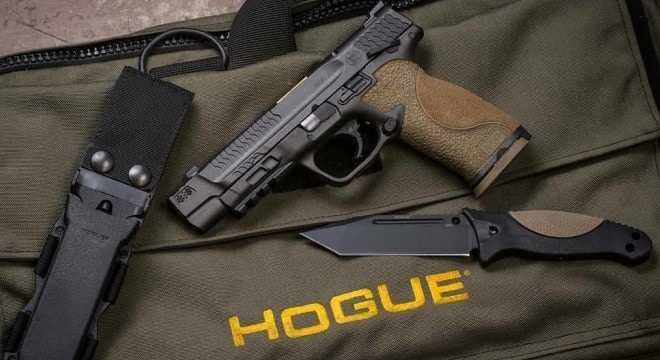 Hogue is joining other firearms industry leaders in breaking off their relationship with Dick’s and Field & Stream (Photo: Hogue)

The popular handgun grip and accessory maker said this week that they are severing ties with the controversial sporting goods big box retailer.

Hogue said they are distancing themselves from Dick’s Sporting Goods and their Field & Stream affiliate, removing them as an authorized dealer of Hogue products. In a statement, Hogue leadership said the retailer brought it on themselves with their recent decisions to no longer offer standard capacity magazines, restrict the minimum age of rifle buyers to 21, and hiring lobbyists to advance gun control efforts.

“Hogue has a long-standing tradition of supporting American enthusiasts with top quality firearm accessories and refuses to work with any organization who supports restricting the rights our Founders fought to provide and protect,” said third-generation managing owner, Neil Hogue.

Over the past half-century, Hogue has been known for their handgun grips but in recent has have expanded their product line to include rifle stocks, knives, holsters and gear bags among others. Dick’s currently lists a number of Hogue grips in their catalog, as does Field & Stream.

Hogue joins other firearms icons such as Mossberg, Springfield Armory and others that have backed away from Dick’s so far this year.

“We are happy to stand alongside our friends in the industry, such as Springfield Armory, who no longer work with Dick’s,” said Hogue, whose grandfather founded the company in 1968.