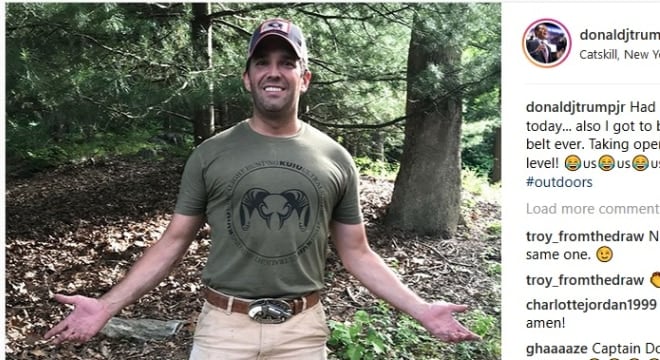 “Had fun getting a bit dirty today… also I got to bust out the coolest belt ever,” wrote Trump. (Photo: Instagram)

The President’s son set off grumbles this week after posting on social media while wearing a groovy belt buckle.

Donald Trump, Jr. over the weekend posted a photo on Instagram while in Catskill, New York posing in dirty work canvas pants, hiking boots and a KUIU hunting tee, but the key accessory was his belt, which was closed with a Freedom Arms buckle complete with its matching .22 mini-revolver.

“Had fun getting a bit dirty today… also I got to bust out the coolest belt ever,” wrote Trump, an avid hunter, and Second Amendment advocate. “Taking open carry to a whole new level!”

Located in Freedom, Wyoming, FA started selling a line of .22LR and .22WMR chambered single-action revolvers with a 1-inch barrel in 1983. Included with the line were buckle/revolver combos that retailed back then for about $200. Today, they go a bit more with collectors, typically about $500-ish depending on condition.

While news outlets suggested the junior Trump may have been on his 171-acre property in New York and free to carry whatever he wanted to on private property, women’s magazine Bustle reached out to David Chipman, a former ATF agent now with Giffords to feel him out on the whole thing.

“Patriotism is much more than just exercising your right to do something; it’s considering your impact on everyone you live around,” Chipman said. “Carrying a gun openly is a big deal, especially if it’s causing concern to other people.”

Guess they frown on buckle guns at Giffords.

Ironically, Chipman was invited to testify by House Democrats against the Hearing Protection Act, a move to partially deregulate suppressors from National Firearms Act control that is supported by Trump, Jr., so it is not the first time the two men’s paths have crossed in a way.

While Freedom Arms hasn’t marketed their version since 1999, Provo, Utah-based North American Arms offers a number of standard belt buckle interfaces for their own popular line of mini-revolvers including ornate and skeletonized versions for about $50-$60.

They even have more customized variants such as this one with silver workmanship with turquoise accents crafted by Albuquerque smith Dennis Chavez. 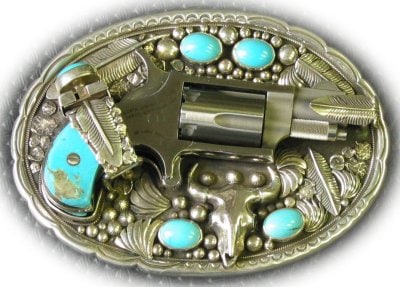 Maybe if NAA had one that had more gold in it, the elder Trump would rock one as well.

Had fun getting a bit dirty today… also I got to bust out the coolest belt ever. Taking open carry to a whole new level! ????????? #2A #opencarry #outdoors