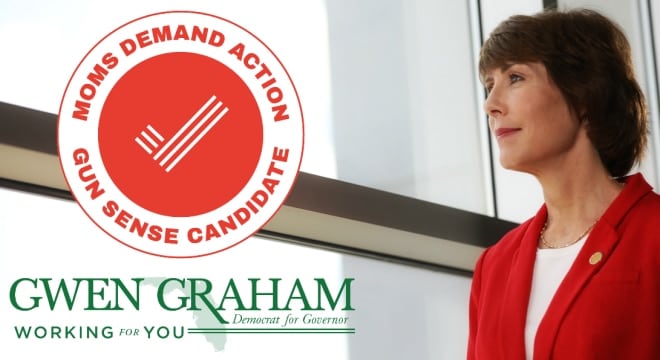 Graham is endorsed by Moms Demand Action and has a platform including promises to bring more gun control to The Sunshine State (Photo: Graham for Governor)

A one-time congresswoman and daughter of a former Florida governor promised this week that if elected she would move to outlaw some semi-auto firearms and their magazines without the help of state lawmakers.

Former U.S. Rep. Gwen Graham, one of several candidates vying for the Democratic nomination for governor in a bid to replace outgoing Republican Gov. Rick Scott, pulled no punches when it came to guns in a debate Saturday night in St. Petersburg.

“My commitment to you is action, not words,” said Graham. “I have found a public safety statute that allows the Governor, whoever she may be, to sign an executive order for public safety reasons banning the sale of military assault weapons.”

As reported by Florida Politics, Graham’s office said that state law outlining the governor emergency powers to quell violence would allow for such a move.

Graham doubled-down on her comments after the forum, posting a link to an article on her gun remarks on social media along with the comment, “I’m not willing to wait until the next tragedy. As governor, I will sign executive orders to address gun safety in my first week.”

Campaigning on a platform that is heavy on gun control, immigration reform, LGBT equality, and women’s rights in an effort to “end 20 years of Republican rule in Florida,” besides her promised ban on assault weapons Graham is a fan of universal background checks and a variety of gun surrender and confiscation programs.

While in Congress she co-sponsored legislation to ban gun sales to those on the secretive no-fly list and expanding background checks. She joined Congressman John Lewis and other Dems in the highly-publicized sit-in on the House floor against gun violence in 2016, a catered event Republicans characterized as a publicity stunt. However, she was one of just a handful of Democrats in the House not to sign on to support a proposed federal assault weapon ban during her term, which could mean her decision to back a ban now is only newly realized.

“That Gwen Graham thinks she would have the authority to override the Constitution because she doesn’t like guns should scare the heck out of everybody,” Marion Hammer, former NRA president and current executive director of the Unified Sportsmen of Florida, told Guns.com. “What other parts of the Constitution does she think she can override?

The one-term congresswoman lost her seat last year after her Tallahassee-area district was remapped and is now thoroughly red. Prior to that, she was an administrator for the Leon County School District and an attorney for a D.C. law firm. Her father is former Democrat governor and senator Bob Graham and she worked on his failed 2004 presidential campaign before moving on to help organize for Howard Dean and John Kerry.

Graham is facing Tallahassee Mayor Andrew Gillum and former Miami Beach Mayor Philip Levine in the August Democratic primary. The winner will be on the ballot against a Republican candidate in November.

After twenty years of total NRA control of Tallahassee, I am so proud of the Stoneman Douglas students and their ability to get something done. As governor, I will sign exectuive orders to ban the sale of assault weapons and implement universal background checks. #FLFreedomForum

The NRA and gun lobby spent $300,000 against me when I ran for Congress — and we beat them. When I'm governor, we'll beat them again and pass universal background checks. #FLFreedomForum