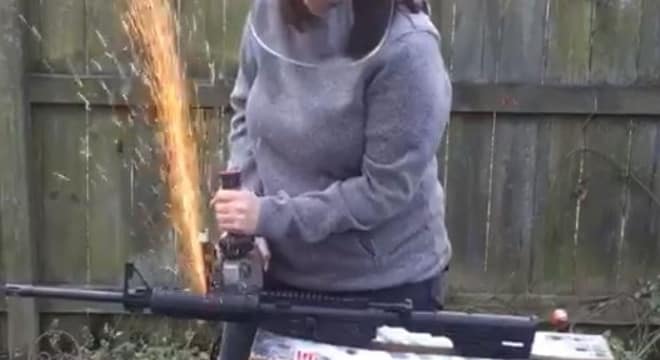 While a national gun control group may have thrown their support behind Mallard, it didn’t translate into a lot of votes in the Democratic primary. (Photo: Screenshot)

A Virginia Congressional candidate well-known for a publicity stunt against guns while on the campaign trail picked up an endorsement from gun control groups but not a lot of votes.

Karen Mallard, a teacher running a low-budget campaign to win the Democratic primary for Virginia’s 2nd U.S. House District, only picked up 37 percent of the vote on Tuesday against the better-funded Elaine Luria, a former Navy officer who runs a Norfolk art studio. With all precincts reporting, Luria grabbed 62 percent of the votes and will face Republican incumbent U.S. Rep. Scott Taylor in November.

“Congratulations to Elaine Luria for winning the Democratic Primary tonight,” conceded Mallard. “Good luck in the General Election. I look forward to helping you defeat Taylor in November.”

Mallard came to the public eye outside of her district on March 7 when she posted a two-minute video on social media during which she announced she was destroying her husband’s AR-15 in an act of solidarity with Marjory Stoneman Douglas High School students in Parkland, Florida, protesting for gun control in the wake of a school shooting that claimed the lives of 17 people. Using a portable saw, she removed the front several inches of the rifle’s barrel and handguard, prefaced and followed with a diatribe on gun violence.

The video since then has been viewed 3 million times and, as reported by numerous media outlets, earned her at least some scrutiny from law enforcement although the educator turned political candidate contended she did nothing wrong.

Mallard announced on March 22, two weeks after the incident, that she had been endorsed as a “gun sense candidate” by Moms Demand Action. In the post describing the endorsement, she used the hashtag #OneLessGun.

In June, the (Newport News) Daily Press reported that Mallard said, “I took a lot of heat when I destroyed my husband’s AR-15 in an act of solidarity with the students of Parkland, Florida. I would do it again. We have to take a stand. Enough is enough.” The paper said he supported a ban on some semi-auto firearms and bump stocks, universal background checks, and a seven-day waiting period for gun purchases.

While the gun control group allied with former New York Mayor Michael Bloomberg’s Everytown organization may have thrown their support behind Mallard, Luria got the nod from Democratic Congressional Campaign Committee’s Red to Blue initiative which helped balloon the Navy vet’s fundraising, causing Mallard to insist that she was “not getting a fair shot.”

As detailed by the Center for Responsive Politics, Luria socked in $510,861 against Mallard’s more pedestrian $68,212 campaign fund.

Taylor, a former Navy SEAL vying to extend his time in Congress beyond his first term, has amassed some $2.3 million.