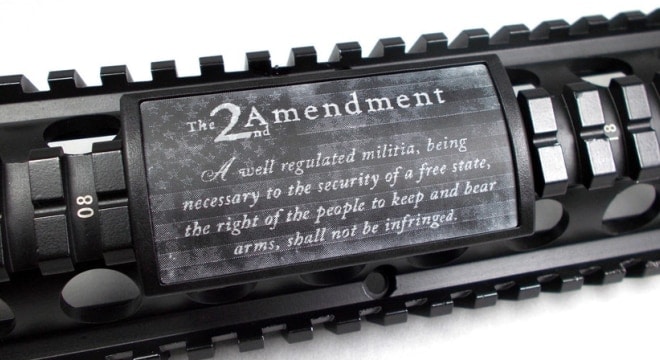 Residents of Deerfield had until June 13 to remove their newly prohibited guns and magazines from the village or risk punishment. Tuesday’s court order halted that while gun rights advocates seek a permanent injunction. (Photo: arcustoms.com)

An Illinois circuit court judge on Tuesday issued a temporary restraining order against a pending local ban on “assault weapons” just before it was to take effect.

The Lake County court blocked the looming prohibition which had been adopted by the village of Deerfield, some 25 miles North of Chicago, in response to a legal filing from a host of gun rights groups and local resident Daniel Easterday.

“We moved swiftly to challenge this gun ban because it flew in the face of state law,” said Second Amendment Foundation founder Alan Gottlieb. “The village tried to disguise its extremism as an amendment to an existing ordinance. The ordinance bans possession of legally-owned semi-auto firearms, with no exception for guns previously owned, or any provision for self-defense.”

The Deerfield Village Board in April unanimously approved a local ordinance outlawing what it defined as “assault weapons” and “large capacity magazines.” The ordinance banned the possession, sale, and manufacture of many semi-automatic firearms as well as most detachable magazines with a capacity of more than 10 rounds. Those with banned guns or magazines could have been on the receiving end of municipal fines of up to $1,000 a day once the city identifies them. Residents had until June 13 to remove the newly prohibited items from the city or risk punishment.

This sparked a lawsuit from Guns Save Life, an Illinois-based Second Amendment member group, with the support of the National Rifle Association quickly followed by the challenge from Easterday which is backed by SAF and the Illinois State Rifle Association.

Deerfield, who has accepted pro bono legal services from the Brady Center in defending their gun ban, said Tuesday that they are weighing their options.

“We are reviewing with our legal team the full written opinion that the Judge entered,” said the Village Board in a statement. “We will, of course, honor the order issued by the Court and temporarily not enforce the ordinance; but we are certainly going to review all of the options available to the Village, including the right to appeal the decision to the Illinois Appellate Court.”