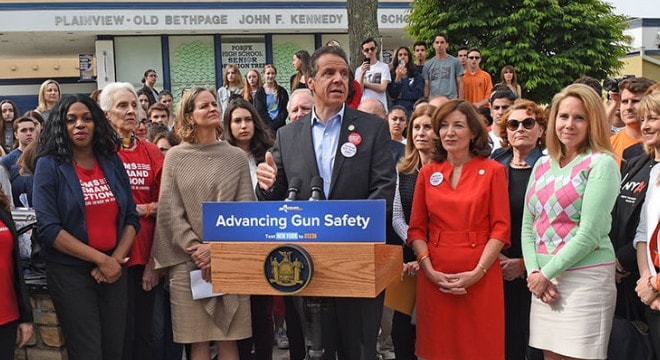 Gov. Andrew Cuomo has been touring the Empire State by school bus with gun control advocates in tow to garner support for a gun seizure bill facing an uphill battle in the state Senate. Republicans characterize it as a stunt as Cuomo runs for reelection. (Photo: Cuomo’s office)

Lawmakers in New York’s Democrat-heavy Assembly on Wednesday approved a gun seizure bill that Gov. Andrew Cuomo is crisscrossing the state to support on a road tour.

The measure, A.11148, would establish extreme risk protection orders in New York that could be used to temporarily seize, for a period of up to a year, the firearms and gun licenses of someone thought to be a danger to themselves or others. The bill passed the Assembly and was forwarded to the Republican-controlled state Senate where similar legislation failed to make the cut by a narrow margin earlier this year.

“Establishing extreme risk protection orders is a critical step towards preventing needless gun tragedies that have become far too common,” said Assembly Speaker Carl Heastie in a statement. “Family and other household members are often the first to know when someone is experiencing a crisis or exhibiting dangerous behavior.”

One of the biggest cheerleaders for the measure is Gov. Andrew Cuomo, who last week announced a statewide campaign, via yellow public school bus, to smooth the way for the legislation.

“Parents should not have to fear sending their children to school every day and teachers should not have to wonder if they will return home from work,” said Cuomo at the start of the campaign. “Together, we can and will pass this common sense gun legislation and we will continue to fight to ensure gun violence has no place in this great state.”

Facing an increasingly tough re-election fight against Sex in the City actress and fellow Democrat Cynthia Nixon, Cuomo’s office this week has issued almost a half-dozen different press releases covering the bus tour, its unvarying speeches, and progress. In addition, the Governor’s campaign has produced a series of digital ads targeting Republican state senators directly on the legislation.

“We only need 1 Republican senator to vote yes to protect our students,” the ad says, urging people to contact their senators.

Senate Majority Leader John Flanagan, R-Suffolk County, himself the subject of one of the ads, earlier this week said he was open to reviewing the legislation backed by Cuomo in the chamber he controls but tempered it with a request that the Assembly should weigh a school safety package passed by the Senate in March. Flanigan also blasted Cuomo’s tour of the state on the taxpayer dime and argued it was more politics than progress.

“In the final year of his second term as the state’s Chief Executive, Andrew Cuomo is driven by two things: his extraordinary disdain for anyone who does not agree with him, especially the Legislature, and Cynthia Nixon,” Flanagan said. “He has put politics ahead of the public interest, and made it virtually impossible to achieve meaningful progress for the people of the state.”