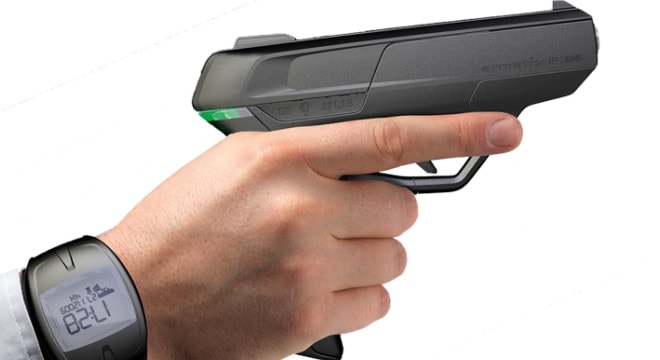 The best-known firearm that incorporates authorized user technology is the $1,400 iP1 marketed by Germany’s Armatix. The gun is designed to only be fired by the wearer of a special RFID-enabled watch. (Photo: Armatix-USA)

A Connecticut Democrat introduced legislation Thursday designed to give all involved with so-called “smart guns” a tax credit in one form or another.

The Start Advancing Firearms Enhancements and Technology Act, introduced as H.R. 6109, would up federal tax credits to cover 100 percent of the research expenses in smart gun technology and, should the firearms become commercially available, exempt smart gun components from long-standing federal excise taxes. The net effect, said the sponsor, would be to both make development less risky and guns cheaper to buy for the consumer.

“If we can incentivize manufacturers to invest in smart gun technology and encourage consumers to buy those products, we can prevent more accidents, reduce violence committed with stolen guns, protect children and bring overall fatalities down,” said U.S. Rep. Jeff Himes in a statement. “And, let’s be very clear, saving lives is the absolute top priority.”

While the language of the legislation is not available, the Congressman’s office said the bill will increase the tax credit for R&D into firearm technology that incorporates biometric or fingerprint locks and radio-frequency identification to offset the full cost of investing in its development. The credit would be available for both those already conducting such research in the field as well as to new start-ups.

Further, it would exempt the firearms and their components from the current 10-11 percent federal excise tax assessed against the manufacturer, which Himes said will translate to lower prices for consumers.

Gun control groups who favor smart gun technology say it has been retarded due to “obstructionism by the gun lobby” and the proposed legislation could help produce technological advancements in the field.

“The technology to make firearms more secure already exists, but more investment in safer guns and accessories is needed for these innovations to reach the market and start protecting our children and communities,” said Robyn Thomas with Giffords. “But in order for that idea to become a reality, we must call on entrepreneurs, businesses, and investors to embrace the challenge of using new technology to power safety innovation.”

The trade group for the firearms industry has long-held that they are not opposed to the further development of so-called smart guns – so long as its use is not made a requirement by lawmakers. Laws mandating the sale of smart guns only — such as a dormant example adopted in New Jersey in 2002 — have been repeatedly blamed for the stagnation in the marketing of personalized firearms even while repeated attempts have been made by Democrats in Congress to restrict the sales of traditional guns in favor of those equipped with the budding technology.

It doesn’t help that the only smart gun made available to the domestic market in recent years is a $1,400 .22LR pistol made by a troubled niche company in Germany that proved nearly impossible to review and, ironically, was shown to be easily hacked with a magnet.

Himes’s legislation has been referred to the House Committee on Ways and Means and has no co-sponsors.