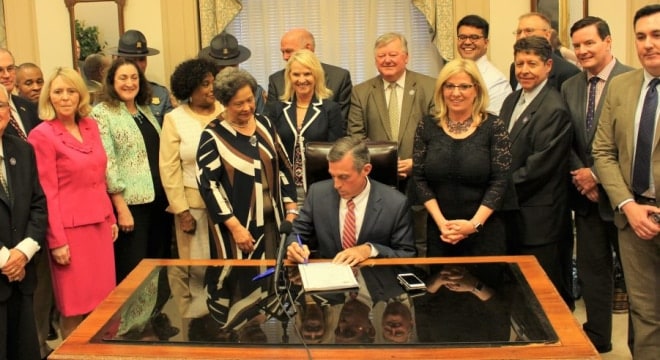 The bump stock bill, HB 300, passed the General Assembly after strong bipartisan support with only two votes cast against it, earning Carney’s signature within hours of its approval by the state House. The new law makes it a crime to buy, possess or sell a bump stock or trigger crank in the state with violators subject to a punishment of as much as 5 years in prison.

“By signing this bill into law, we are saying that there is no place in Delaware for bump stocks and other devices that are used to increase the rate of fire of semiautomatic weapons, making these weapons even more potentially deadly,” said Carney in a signing ceremony.

The country’s latest state ban on bump stocks would make it a Class E felony to sell, transfer or buy such a newly banned accessory or trigger crank in Delaware under threat of a $5,000 fine and up to 5 years in prison. Simple possession would be a misdemeanor for the first offense, stepping up to a felony charge for any subsequent.

While there is no avenue for legal ownership, the law is one of the few to authorize compensation for owners of current devices. Those with the now-restricted devices can receive $100 per stock or $15 per crank through a process coordinated between local law enforcement and the Delaware Department of Safety and Homeland Security. A one year window, stretching until June 30, 2019, will be open to legally surrender devices currently circulating in the state.

While at least seven states have banned bump stocks and assorted other devices since their use in the Route 91 Harvest shooting last October in Las Vegas that left 58 dead and some 850 others injured, only Washington has offered to compensate owners for surrendered accessories at a price of $150 per stock. For reference, before the company stopped taking orders last month, bump stock maker Slide Fire sold such stocks for $179-$329.

Both Florida and Maryland are facing federal lawsuits over their respective bump stock bans, with each holding that mandatory surrender of devices without any compensation violates the Takings Clause of the Fifth Amendment.

Although the Senate Judicial and Community Affairs Committee last week rejected SB 163, which aimed to ban new sales of a number of guns by name and type as well as place restrictions on the use of those currently in circulation, powerful Democrats are attempting to keep the bill in motion.

The bill’s sponsor, Sen. Bryan Townsend, D-Newark, said at a gun control rally on Wednesday that the legislation should be put to a vote from the full Senate, even if legislative rules have to be suspended to do so, as reported by Delaware Online.

Supporters from Moms Demand Action argue polling paid for by the group indicates such a ban would be popular with voters. The event and poll were trumpeted by the state’s Democratic Party headquarters, parroting the call to bring the ban proposal to a floor vote.

In response, Senate President Pro Tempore David McBride, who holds sway in a chamber with an 11-10 split between Democrats and Republicans, announced he would take the rare step to try and suspend the chamber’s rules and hold a floor vote on the measure as soon as next Tuesday. His chances of success, with at least one Dem — Sen. Bruce Ennis — having already voted against the assault weapon ban in committee, are slim and would likely require some bipartisan support.

Opponents among the state’s vocal Second Amendment member groups described the polling as “an outright falsehood” and Townsend’s legislation unconstitutional.