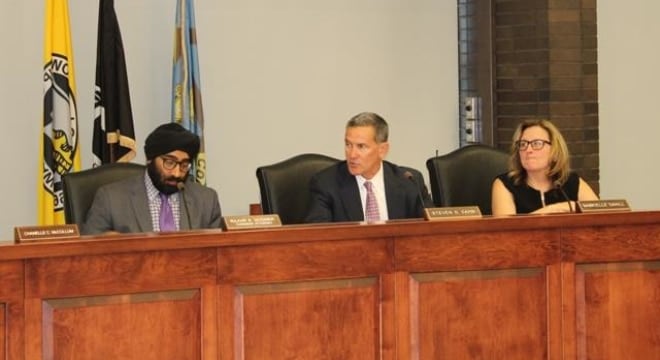 The city of Piscataway on Thursday passed a local zoning ordinance that Second Amendment advocates argue will bar any legal gun sales in the township.

The zoning change forbids retail sales from within 1,000 feet of bars, college campuses, daycares, medical facilities, parks, places of worship, schools and the like. Piscataway leaders say it is the first of its kind in the state and will help keep the city of 56,000 residents safer, although New Jersey banned “assault weapons” in 1990, and has incrementally expanded the ban over the past three decades.

“An AR-15 with a standard round has a maximum effective range of 400-600 meters. At the very least, those who sell these weapons of war under lax federal laws should not be that close to places where children and families gather,” the measure’s sponsor, Councilman Steven Cahn, said. “Since the federal government refuses to ban these weapons, we need to be ever more proactive at the local level.”

The Association of New Jersey Rifle and Pistol Clubs warned the city in a legal letter that the new zoning effectively bans gun shops anywhere in Piscataway and is unconstitutional.

The gun rights group pointed out that in a high-profile case in California where county officials enacted strict zoning that regulated away the possibility of new firearms retailers, federal courts only upheld the law because would-be gun buyers could still purchase them somewhere in the area from existing shops, saying the new zoning restriction did not burden the right to keep and bear arms but in turn just limited the ability to open new gun stores. As Piscataway currently lacks any gun retailers, the allowance does not apply, argues the gun rights group. Lists of federal firearms licensees maintained by federal regulators as of May do not hold any with Piscataway addresses.

“This proposed ordinance would violate the Second Amendment as well as state law pre-empting towns from regulating firearms sales,” said ANJRPC executive director Scott Bach in a statement. “The premise behind the ordinance is absurd – criminals don’t buy guns from licensed dealers, and locating sales 1,000 feet from property in Piscataway will neither stop nor deter someone intent on doing evil. The local grandstanding politicians pushing this measure don’t seem to understand the difference between law-abiding gun owners and criminals.”