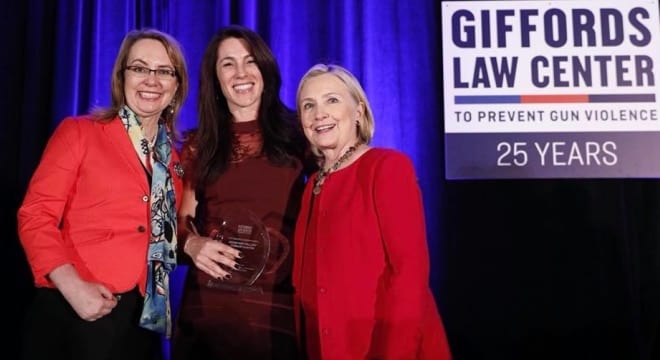 To a standing ovation from gun control advocates in San Francisco last week, former Secretary of State Hillary Clinton placed a share of the blame for her failed White House bid on the gun lobby.

Clinton, speaking at a Hyatt Regency dinner in which she was the guest of honor for the Giffords Law Center, gave fresh legs to the 2016 effort by the National Rifle Association to support Republican candidate Donald Trump for President.

“The gun lobby spent about $30 million against me, not having the guts to take on specific gun proposals,” Clinton said. “In fact, their ads had nothing to do with guns. They were just outright lies.”

Regardless of the NRA’s cash thrown at the race, Clinton lost the election despite some $800 million spent in support of her campaign whereas Trump won with about $400 million in fundraising.

Clinton, who during her latest presidential campaign criticized the Supreme Court’s Heller ruling recognizing an individual right to keep and bear arms and expressed an interest in an Australian-style gun ban, was recognized by Giffords as a “gun safety trailblazer” who “has worked tirelessly to protect children and campaigned boldly to build safer communities.”

According to federal filings compiled by the Center for Responsive Politics, the Giffords PAC has seen their war chest to spend on political campaigns slump in recent years. In the 2014 election cycle, the group was able to spend $19.5 million whereas two years later this dropped to $13.4 million. In the current mid-term cycle, Giffords has spent about $7.5 million.