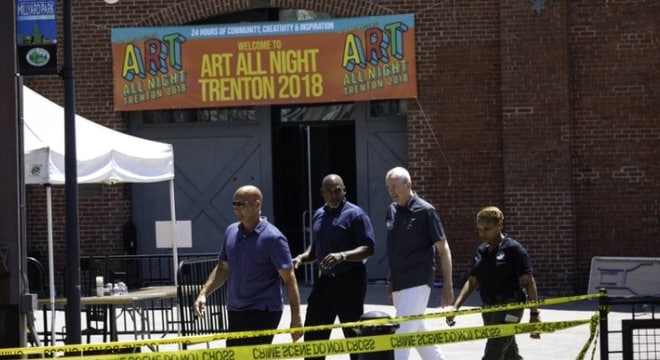 Gov. Phil Murphy visited the scene of the Trenton Art All Night festival on Sunday, where hours earlier 22 were injured– 17 by gunfire– in what Mercer County Prosecutor Angelo Onofri said occurred because of gang-related tension (Photo: Murphy’s office)

Although the deceased gunman was a felon convicted of homicide-related charges and had been released from prison early, New Jersey Gov. Phil Murphy joined gun control groups to urge for stronger gun laws in the aftermath of a weekend shooting that left 22 injured.

Multiple gunmen attacked the Trenton Art All Night festival early Sunday morning in a gang-related shooting. Police identified at least two suspects: Tahaji Wells, 33, who was killed during the shooting, and Amir Armstrong, 23, who was injured. A third suspect, currently unidentified, is hospitalized in critical condition.

Wells was sentenced to serve 18 years in 2004 following a deadly shooting and had picked up a six-year extension for gang-related racketeering while incarcerated, but he was released from prison earlier this year. Nonetheless, Murphy went on the offensive for more gun laws just hours after the shooting.

Murphy’s words on gun violence were joined by statements issued independently on Sunday by the Brady Campaign, Giffords, and Moms Demand Action. In each, weak gun laws, milquetoast lawmakers and a powerful firearm culture were indicted by the groups as the root of the issue.

“The ‘guns everywhere’ agenda pushed by the gun lobby doesn’t create a safer America — it creates a more violent nation where art festivals, schools, movie theatres, concerts, nightclubs, and almost every public venue are no longer safe,” said Brady co-president Avery Gardiner. “There’s no other public health epidemic that we would choose to simply ignore, but gun violence is absolutely an epidemic blighting our nation. These tragedies simply cannot continue.”

Trenton Mayor Eric E. Jackson extended his sympathy to those injured in the city in a statement before railing against guns.

“All shootings — whether multiple or singular, whether in a city or a suburb — are a crisis,” said Jackson, like Murphy, a Democrat. “In Trenton we have been tackling this issue for quite some time. This can’t be discarded as just random violence; this is a public health issue. We have to work cooperatively and collaboratively with parents and law enforcement to end this gun violence and destruction in our towns.”

Elected in 2014, Jackson has in the past promised to take what was reported as “drastic measures” on guns crime ranging from “buyback” campaigns that netted 1,735 unwanted guns from the community and prodding Trenton police to form a Violence Interdiction Team focusing on aggressively working to combat crime.