Gun collection of late comedian Jerry Lewis up for auction 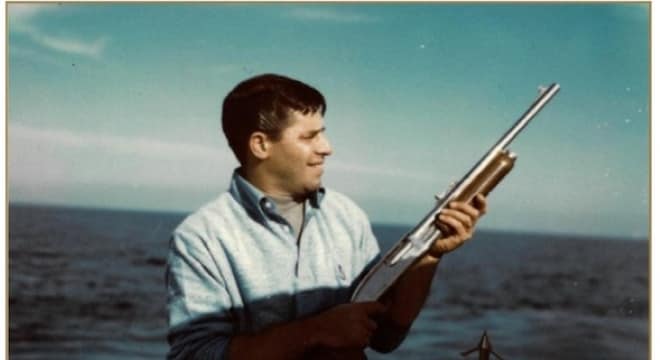 Lewis with a shotgun, several of which are part of his collection (Photo: Julen’s Auctions)

Apparently, the New Jersey-born “King of Comedy” was a fan of snub-nosed revolvers, Beretta pistols and various riot guns.

While the late slapsticky telethon host and actor who moved in much the same orbit as the famous Rat Pack for years has a lot of Hollywood-Vegas collectibles coming up for auction — to include gold watches given to him by both Dean Martin and Sammy Davis, Jr. — it is his firearm collection that is featured first in a 212-page catalog by Julien’s Auctions set for Friday.

Along with his Las Vegas Metro-issued concealed carry permit, estimated to bring $300, Juliens has no less than eight Beretta semi-auto handguns — mostly Model 92s — a pair of Smith & Wesson 3913 compacts, a Colt Agent, and at least 16 Smith & Wesson snubnosed J-frame .38s. One of the latter, a Centennial Model 40, is inscribed “Jerry Love Mel 8-74” which could have come from toe-tapping jazz crooner Mel Torme who appeared with Lewis in his MDA telethon for a duet in 1974. 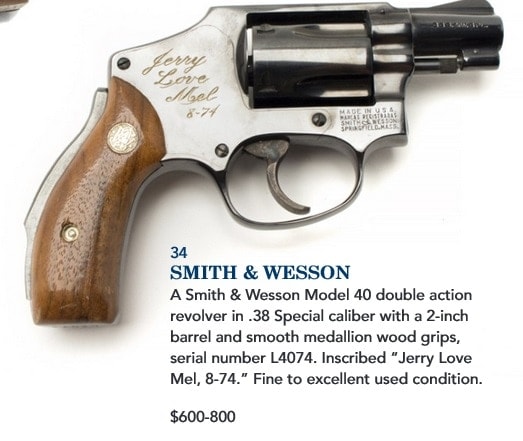 Lewis, who had a long friendship with Torme, mourned the “Velvet Fog’s” death in 1999, saying, “There could never be anyone to replace Mel, not only as a singer but as a dear friend.”

Lewis also had a number of shotguns, to include Mossberg, Remingtons, and Winchesters, across several different gauges ranging from a trio of pistol grip Model 500s, two Defender riot guns and an immaculate Remy 1100LT with high-gloss walnut furniture to a $20,000 silver inlaid John Rigby SXS. Several classic guns such as a Browning Hi-Power and a tabletop full of Colt SAA’s round out the collection.

The cowboy guns — including a Buntline Special complete with a 12-inch barrel and Arvo Ojala leather holster rig — speak to Lewis’s regular nightclub act that for a time included a quick draw routine.

According to the Internet Media Firearm Database, although Lewis appeared in scores of movies, he only handled a firearm in 1963’s Who’s Minding the Store? The scene involves Lewis as a salesman who tries to ineptly help sell an elephant gun to a world-class safari hunter and then blows himself across the sales floor with the recoil from a .480 Wesley Richards double rifle.

The upcoming auction will take place in Las Vegas at Planet Hollywood.