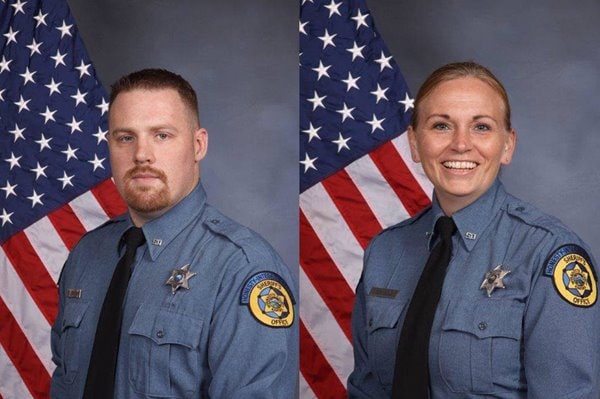 “When they pulled into the parking lot and readied to transport these inmates, they were overcome,” Maj. Kelli Bailiff, a spokeswoman for the Wyandotte County sheriff’s office, told reporters Friday. “It is very possible that with their own firearm they were both shot.”

Rohrer, who joined the department in 2011, died from his injuries Friday at the University of Kansas Medical Center, police said. King, a 13-year veteran, died early Saturday morning.

Keeley Hanson, a bartender at the local Chicago’s bar, a popular hangout for law enforcement, told KHSB the incident left the community “heartbroken.”

“I knew it wasn’t going to be good because I know every single one of them and it’s just heartbreaking,” she said. “Hearing it was her, you’re lost for word. She always had a smile on her face. She was always just a sweetheart and always been super nice to me.”

The Kansas City Police Department is leading the investigation. So far, no additional information about suspects has been released.

Gov. Jeff Coyler said news of the shooting left him “deeply saddened.” “Our law enforcement officers put their lives on the line each and every day to protect the public and their selfless service deserves our highest honor,” he said.

Mayor David Alvey called the officers heroes with “spirits of self-giving” in a news release Friday. “And so, as we work through all of our emotions, as we try to find answers to all of our questions, we must look to the sacrifices of Deputy Rohrer and Deputy King and believe what they believed: that the fight for goodness and truth and justice is worth our very lives, every day of our lives, and we must be ever-vigilant for the battle,” he said.