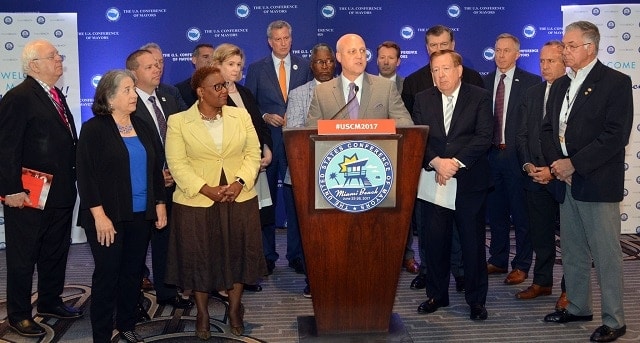 The U.S. Conference of Mayors at a 2017 annual meeting. The bipartisan group has along history of advocating for stricter gun regulations. (Photo: USCM/Facebook)

The United States Conference of Mayors passed a handful of resolutions last week calling for more gun control after a spate of mass shootings elevated debate around federal firearm policies.

The bipartisan group represents elected leaders from cities with a population over 30,000 and touts a long history of advocating for stricter gun regulations as a panacea to violent crime.

“The U.S. Conference of Mayors stands with the students from Marjory Stoneman Douglas High School and all other young people and adults committed to seeing reasonable gun safety policies become reality and to reducing gun violence in our cities,” the group said at its 86th annual meeting in Boston on Tuesday.

“Policies like background checks on all gun sales and Red Flag Laws save lives. It’s as simple as that,” Freeman-Wilson said. “The U.S. Conference of Mayors will continue doing everything in our power to keep our communities safe so that children and families are able to live free of the fear of being gunned down.”

“We wouldn’t be doing our jobs as mayors if we weren’t focusing on gun violence — an issue that threatens the public safety of every community, big and small,” she said. “Our bipartisan network of mayors knows how to work together and compromise on policies that save lives. If only our partners in Congress did the same.”

Gun control groups, including Everytown for Gun Safety and Mayors Against Illegal Guns, praised the conference for reaffirming its support for stricter regulations.

“Mayors are on the frontlines of America’s gun violence crisis, so it’s no surprise they’re also leading the charge to pass common-sense, life-saving laws,” said Everytown president John Feinblatt. “It’s time for our leaders in Washington to follow the lead of America’s mayors and put public safety over NRA priorities.”