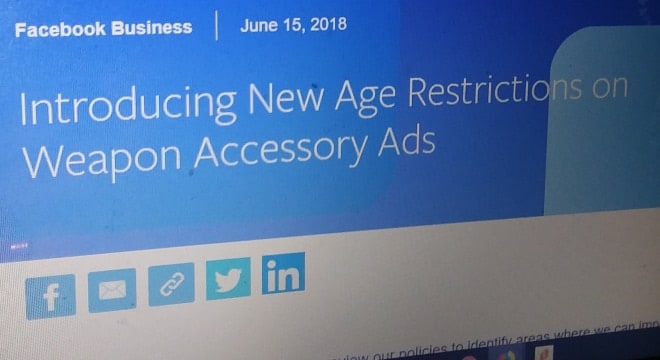 An estimated 6.8 million Americans aged 13 to 18 are believed to use Facebook and, under new rules, starting this week they will no longer see ads for various items deemed by the social media network of being “weapons accessories” (Photo: Chris Eger/Guns.com)

Facebook said the policy shift, announced last week, doesn’t affect posts from friends or pages, just ads that vendors pay the network for distribution into an individual’s regular feed as a “sponsored” post.

“We regularly review our policies to identify areas where we can improve,” said the company with 214 million U.S. users. “As part of these efforts, we’ve decided to make some changes to the way in which weapons accessories are advertised on Facebook.”

While the online social media giant has long-restricted paid ads for firearms and some accessories such as magazines to an 18-and-older crowd, the new rules will apply to such innocuous items as optics, flashlights, belts, and holsters — many of which could arguably be used by youth hunters, shooting sports participants and airsofters.

According to Pew Research, about two-thirds of U.S. adults use Facebook with numbers skewing higher among younger demographics to the point where around eight-in-ten of those ages 18 to 29 interact with the platform daily. An estimated 6.8 million Americans aged 13 to 18 are believed to use Facebook.