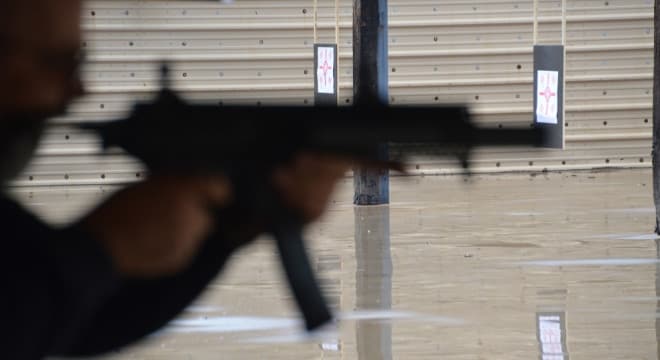 A proposal to ban the sale of many popular semi-auto firearms in the state was rejected by Delaware lawmakers for the second time this month (Photo: Chris Eger/Guns.com)

Democrats in the state Senate failed on Tuesday to muscle through a rejuvenated bill to outlaw many semi-auto firearms while a gun seizure proposal had better luck.

Although SB 163 had already been turned away by a key Senate committee, Majority Leader David McBride attempted this week to take the unusual step of voting to override the chamber’s rules and hold a floor debate on the measure to ban various guns deemed “assault weapons.” With Dems controlling the body by a single seat, McBride needed all hands on deck to push the override through but failed after two members of his own party crossed the aisle and cast their lot with Republicans.

“I’m sure it comes as no surprise that I am deeply disappointed,” said the bill’s sponsor Sen. Bryan Townsend, D-Newark, immediately after the vote and before he was interrupted by cheering crowds of gun rights supporters. This triggered Lt. Gov. Bethany Hall-Long, a fellow Democrat, to warn she was ready to clear the gallery “if we are not in a professional decorum.”

The bill’s language would have barred the sale and transfer of specific firearms such as AR-15s and Barrett .50-caliber rifles, as well as any semi-automatic with a detachable magazine and two or more cosmetic features such as a folding stock or flash suppressor. While the legislation allowed the grandfathering of guns and magazines already in circulation, owners could only have them at home or their place of business, and only take them to a shooting range or educational exhibit. Violations of the law would be a felony and result in as much as 10 years in prison.

The National Rifle Association lauded the failure of the measure, saying in a statement that “Senate Bill 163 was one of the most extreme gun control bills introduced this session,” and arguing it would have banned many commonly owned firearms used for self-defense, target shooting and hunting.

Although there was a partisan divide over SB 163, lawmakers in the Senate voted unanimously in favor of HB 222, which would enable a family member or law enforcement to seek an emergency “Lethal Violence Protection Order” to temporarily seize the guns from someone thought to be a threat to themselves or others. The measure passed the House earlier this month without a single opposing vote.

Under the bill, a court may authorize an LVPO for a period of up to one year but must allow the subject of such an order to petition for a hearing to have their guns returned. While those faced with an order can voluntarily hand over their firearms to law enforcement or a gun dealer to hold, the bill also enables police to conduct a search and seizure and guarantees the agency’s immunity from civil or criminal liability for any damage to guns stored or transported, barring intentional misconduct. Those making false reports could face perjury charges.

The move, characterized as “red flag” legislation, was supported by a host of gun control groups.

“Delaware recognizes the importance of passing legislation that effectively protects families from loved ones in a crisis who may get their hands on a gun,” said Nico Bocour with Giffords. “By establishing a Lethal Violence Protection Order, law enforcement officers and family members are given a critical tool to better prevent an emergency from turning deadly.”

Delaware's red flag law passes without a single vote of opposition in the House or Senate. Thanks to all the advocates including @DeCAGV @MomsDemand and @GiffordsCourage who worked so hard for this bill. Delaware is a safer state due to your efforts. https://t.co/dnjpjw0acq