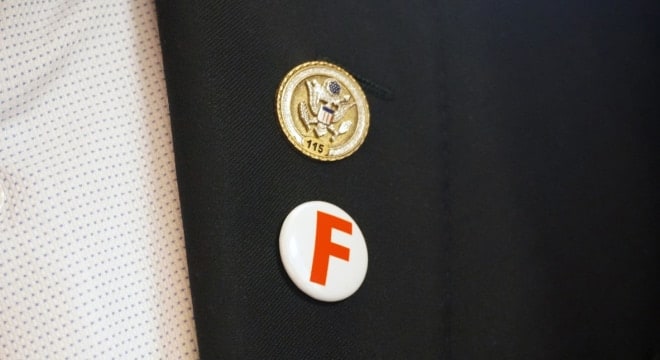 Both sides of the gun rights debate often tout their grades from the NRA, such as the above shown on the lapel of U.S. Rep. John Yarmuth, a Democrat from Kentucky who has backed a number of gun control proposals. (Photo: Rep. Yarmuth)

The practice of issuing grades to lawmakers over their stance on gun policy has become a double-edged sword of sorts.

For a decade the National Rifle Association’s Institute for Legislative Action has been grading lawmakers and political candidates at the federal and state level over their position on gun rights issues. The grades, from A through F mimicking school report cards, are formulated through past votes while in office on legislation concerning gun regulation as well as surveys sent to declared candidates by the organization.

While the Second Amendment powerhouse is still actively circulating questionnaires, releasing endorsements and publicly posting current grades, Everytown is crying foul that the organization has apparently pulled access to past years’ ratings for undetermined reasons.

Revealed by a recent Washington Post article, the newspaper said an unnamed NRA staffer suggested the move came because enemies of the group were using the grades to their advantage.

“An NRA A-rating has gone from a badge of honor to a scarlet letter,” argues Everytown President John Feinblatt, whose own group has posted what they contend are archived NRA grades going back to 2009. “The political landscape has shifted, and voters are demanding leaders from both parties stand up to the gun lobby or find another job.”

While the group formed by billionaire anti-gun crusader Michael Bloomberg holds the ratings are an albatross for some lawmakers, many conservatives embrace their high-ranking grades.

“I am proud to receive an ‘A’ with the NRA,” said Georgia state Sen. Hunter Hill, who ran for the GOP nomination for governor this year. “They are our nation’s leading 2nd Amendment advocacy organization, and I thank them for their continued work to defend every American’s God-given right to protect themselves, their property, and their family.”

On the other hand, progressive candidates often take advantage of their own basement-level grades from the NRA, using them as a sort of backhanded verification of their gun control creds.

Six-term Kentucky Democrat U.S. Rep. John Yarmuth, like all members of the House, is running for re-election this year and has taken to wearing his “F” rating on a lapel pin since March.

I’m so proud of my @NRA rating, I’ll wear it on my chest. I invite my colleagues to join me in wearing our F ratings every day until the GOP finally stands up to the gun lobby and helps us pass common sense gun safety legislation. Find me to get a pin. #MarchForOurLives pic.twitter.com/sOECS54QOK

His move was picked up by other career Dems, such as New York’s Gregory Meeks and Nydia Velázquez, both of which have represented urban New York City-area districts for decades and have long-backed various gun bans and firearm regulation bills.

Proud to showcase my F rating from the NRA tonight on the House floor. Thanks for the pin @RepJohnYarmuth #EndGunViolence #Enough pic.twitter.com/r8IBMg5LiQ

An “F” from the @NRA is the only failing grade I’ve ever proudly received.

I’ll maintain my rating by fighting the gun lobby at every turn, because our children deserve to live without fear. Will you join me in this fight for a safer tomorrow? pic.twitter.com/joYWL0SXyZ