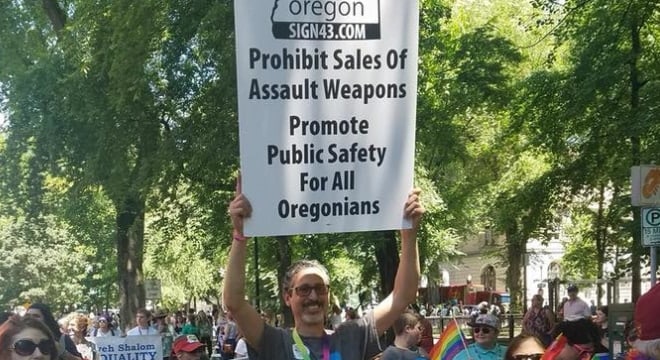 The Oregon Supreme Court is expected to rule on IP 43 as early as next week, at which point– if certified to proceed– organizers would face the challenge to collect 88,184 acceptable signatures in a matter of days. (Photo: Lift Every Voice Oregon)

Backers of a mandatory gun storage referendum are throwing in the towel on their campaign while a second, to ban “assault weapons,” is under pressure to qualify for the ballot.

On Wednesday, supporters of Initiative 44, Oregonians for Safe Gun Storage, announced they were suspending their efforts to put their proposal in front of voters. Calling it a “strategic choice,” the group said they were switching to an effort to advocate state lawmakers for a gun lock mandate next year rather than put the issue on the ballot this year.

The move comes as the language of the measure was tied up in litigation from Second Amendment groups for weeks and, facing a July 6 deadline to collect almost 90,000 signatures, they felt it would “almost certainly fail even with a large investment of resources and grassroots enthusiasm.”

The three-page measure would have made it a crime for someone possessing a firearm not in use to have it unsecured. The initiative sought that guns be stored with a trigger or cable lock or inside a locked container, with stiffer penalties — up to $2,000 in fines — for those who leave an unsecured firearm in an area where a minor may reasonably find it. Should an unsecured gun be used in a shooting that leads to an injury, the gun owner would be held liable.

The group behind it was allied with Giffords and included Jenna Yuille, a longtime “engagement manager” for the national gun control group, as one of its chief petitioners.

“If passed, IP 44 would have forced law-abiding gun owners to render their firearms useless in a self-defense situation and would have severely restricted Oregon’s youth hunting program,” said the National Rifle Association.

A further effort, Initiative 43, backed by a trio of Portland-area religious leaders, is fighting to have their petition ballot language certified by the Oregon Supreme Court before they can begin their own signature gathering process. Facing the same July 6 suspense date as the now-failed IP 44, backers promise they have 600 trained volunteers waiting to hit the streets but the can’t do so until green-lighted by the courts.

“The time to vote on this common sense public safety and gun violence issue is now,” one of the three chief petitioners, Lutheran pastor Walter Knutson, said last week. “The Lift Every Voice Campaign is hopeful that the attorney general and Supreme Court will handle this in an expeditious manner so we will be able to gather signatures as soon as possible and let the people of Oregon have their voices heard.”

The five-page text of the measure would outlaw a wide swath of semi-auto firearms as well as detachable magazines capable of holding more than 10 rounds. If approved by voters, it would require owners of targeted guns and accessories to destroy them, hand them over to police, move them out of Oregon, or register them with state officials. Possession of a regulated device without proper registration would be a Class B felony, a crime that brings with it up to 10 years in prison and a $250,000 fine under Oregon law.

The effort is supported by a number of gun control advocacy groups including CeaseFire Oregon, an organization that has backed sweeping weapons bans in years past. The high court is expected to rule on IP 43 as early as next week, at which point — if certified to proceed — Knutson’s group would have to collect 88,184 acceptable signatures in a matter of days.