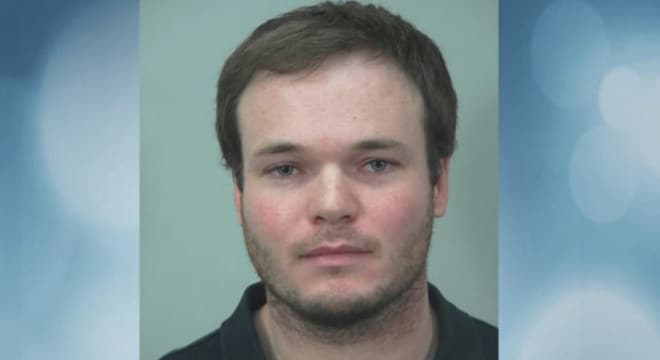 Justin Fahy told police he was in the wrong bathroom accidentally, but security footage showed that he had been there for 14 minutes. (Photo: Dane County Jail via Channel 3000)

A former federal agent pleaded guilty in a Wisconsin court last week to charges stemming from a 2017 incident where he was caught in a women’s restroom of a state university.

Justin T. Fahy, 27, received a year’s probation on a misdemeanor charge of attempting to capture an intimate representation following his plea. At the time of his arrest last December, Fahy was a special agent with the Bureau of Alcohol, Tobacco, Firearms and Explosives.

According to University of Wisconsin-Madison police, Fahy was arrested on campus at Witte Residence Hall after a female victim reported that Fahy slipped his phone under a restroom stall and snapped photos of her. While the federal agent told campus police that he went into the restroom by mistake and asked them not to report the incident over concerns he would lose his job, security footage showed that he was in the women’s restroom for at least 14 minutes.

Further, a search warrant to inspect Fahy’s phone found that it had been recently reset to a backup point sometime earlier in the year, which investigators took as a move to destroy evidence.

Witte Hall is a mixed coed student residence with a 1,132-person capacity close to Madison’s Kohl Center, as detailed by the school.

Assigned to the ATF’s St. Paul Field Office at the time of his arrest, the agency said Fahy had been released five days after the incident. In addition to his probation, he has been ordered by the court to undergo a psychological exam and attend counseling. UW-Madison has officially banned him from campus under a state law that provides for six months in jail and a $500 fine for violations.

The matter with Fahy is not the first black eye for the bureau’s St. Paul Field Office. The division came under fire in 2014 after Operation Fearless, where the Milwaukee Journal Sentinel exposed that agents operating a fake storefront to get illegal guns off the street instead lost government-issued firearms, had their building burglarized of $40,000 worth of taxpayer-bought merchandise, used a brain-damaged man to set up deals, and arrested at least four of the wrong people.

The supervisor over the botched operation retired rather than be reassigned while seven other agents involved were given what amounted to a slap on the wrist. In St. Paul’s defense, however, a 2016 Justice Department review found that ATF undercover storefront ops in numerous other cities were also rife with problems.