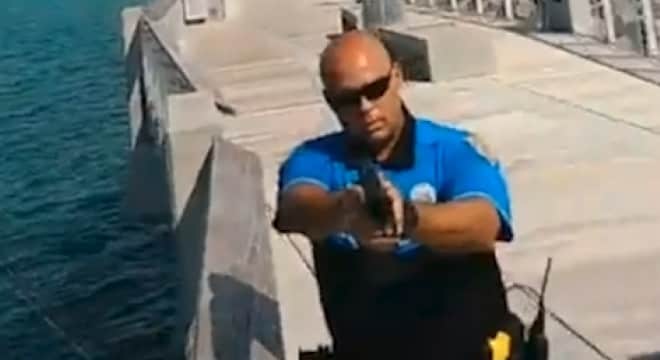 A group of Florida Carry members was detained and at least one had his firearm confiscated by police on a Miami Beach pier over the weekend. (Photo: Screenshot)

Gun rights advocates are livid after Miami Beach Police on Sunday briefly detained a group of fishermen on a public pier over questions on their holstered handguns.

The anglers, members of Sunshine State gun rights group Florida Carry, are shown in a live-streamed video of the event being interviewed by responding officers who have their sidearms drawn. While the advocates, who were ultimately released after two hours, hold they were within their rights as state law allows for legal open carry while hunting or fishing, police feel they responded within guidelines.

“Given the current climate, if six people show up to a pier in South Beach carrying guns, our citizens expect us to respond promptly and address any potential danger,” Miami Beach Police Chief Daniel Oates told the Miami Herald. “We did so, and I am confident our officers acted appropriately.”

One of only a handful of states without a provision for legal open carry, the option of bringing a holstered handgun along while fishing in public has long been a tactic used by supporters of the concept to exercise their rights. In 2011, Guns.com reported on a group of 100 such advocates in Venice, Florida as well as subsequent events held in conjunction with Florida Carry over the years. Earlier this year some 250 “openly bearing arms and fishing poles” were on hand in Ocala.

The group, who has unsuccessfully fought both the state Supreme Court and the legislature over open carry, isn’t backing down from the latest incident. Eric Friday, an attorney for Florida Carry who successfully sued the city of Tampa over a similar 2015 case of a detained fisherman with a handgun, warned Miami Beach Police that their officers had committed an aggravated assault in their actions and is reportedly seeking more information about the interaction.

The illegal attack on our members by the Miami Beach PD is a developing incident. We are pouring every necessary resource in to this incident.