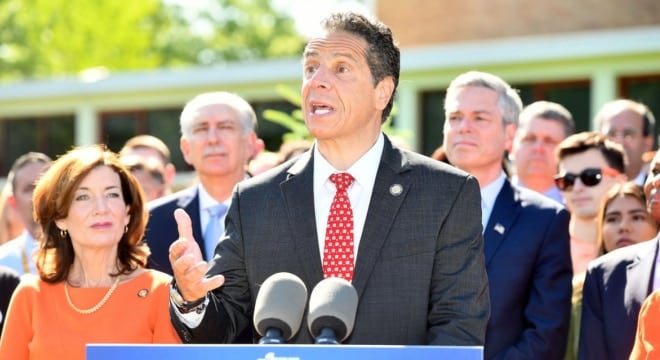 Despite a last-minute bus-borne campaign to push the gun seizure bill over the finish line, New York lawmakers closed shop without the measure passing the Senate.

The proposal, A.11148, aimed to establish extreme risk protection orders that could be used to temporarily seize, for a period of up to a year, the firearms and gun licenses of someone thought to be a danger to themselves or others. The bill passed the Democrat-controlled Assembly earlier this month. Gov. Andrew Cuomo took to the streets to campaign for the Republican-backed Senate to do the same but the drive fell flat as the session ended without movement on a similar measure.

Nico Bocour, Giffords’s state legislative director, slammed lawmakers by saying they “let New York families down” by failing to pass the ERPO bill. “We are disappointed to see this critical legislation that could save lives fail to make it to the Governor’s desk because of Senate leadership’s inaction,” said Bocur.

The proposal had long been championed by state Sen. Brian Kavanagh, D-Manhattan, who has been working since 2014 to move his bill through Albany without result. Despite backing by a who’s who of state and national gun control groups and fellow Democrats, Kavanagh’s latest version has been repeatedly sidelined in the upper chamber of the legislature. Much the same as this session, although a companion measure was approved by the Assembly last year, the Senate never took up the bill.

“Extreme Risk Protection Orders will save lives — especially in places where high gun-related death rates are driven by high gun suicide rates,” Kavanagh argued in a statement just before the end of the session.

Second Amendment groups have panned the proposals as duplicative of existing laws without addressing potential health concerns of those who are the subject of such planned seizure orders.

While Cuomo, who undertook a week-long campaign via school bus to attempt to move the ERPO bill, has since switched focus to challenging the White House on immigration issues, he has also left the door open to calling state lawmakers back to work in a special session to address unfinished business.