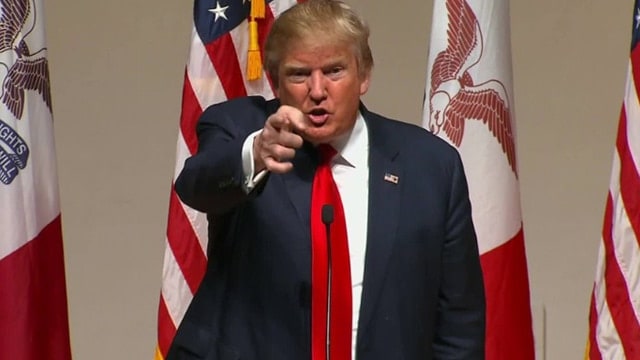 Then Republican candidate Donald Trump saying “I could stand in the middle of Fifth Avenue and shoot somebody and I wouldn’t lose any voters” in January 2016. (Photo: CNN)

The Daily Dot, which specializes in covering a variety of easily digestible pop-culture subjects sandwiched in a flurry of ad pop-ups, said they think the release of the information will reveal “a great deal about the president’s stance on firearms.”

The outlet filed a lawsuit in conjunction with law firm Davis Wright Tremaine. Specializing in media and entertainment law, the firm argues that, due to the Trump family’s position on gun rights issues, the NYPD should make the information on the family’s gun permit and license applications public.

“The president is the chief law enforcement official in the country and has said he is reviewing the current gun laws in the wake of the school shootings in Parkland and elsewhere, and his sons serve as advisors to him on gun-related issues,” said Jim Rosenfeld, a Davis Wright Tremaine partner. “In light of their very public positions and many public statements on these issues, we don’t believe any of the exceptions the police department claim to the general presumption of openness enshrined in the law are compelling or legally valid with respect to the Trumps’ own gun records.”

The 11-page filing in the New York County Supreme Court requests the handgun license applications for Trump and his sons, Donald and Eric. First requested in February from the NYPD, the agency declined to disclose the information citing that it was an “unwarranted invasion of personal privacy” and would “endanger the life or safety of the applicant.”

The senior Trump, who has reportedly enjoyed a notoriously hard-to-get NYC handgun permit since at least the 1980s, was outspoken on his support of carry rights while on the campaign trail. His son, Donald, Jr., has held a permit since at least 2007 and recently obtained one in Pennsylvania as well.

It costs $340 to file an application with the NYPD for a handgun permit, not including an $87 fingerprinting fee, and only about 35,000 are in circulation for a city of 8.5 million. The process for obtaining such a license is seen as daunting by many as it includes a host of training and vetting requirements as well as a “proper cause” test for carry permits. This has driven a number to seek the help of attorneys and niche handgun licensing consulting companies, which has sometimes led to scandal for the department. In 2016 a “fixer” who charged as much as $18,000 for his help obtaining permits was convicted in a bribery scheme that included three members of the NYPD’s licensing division.