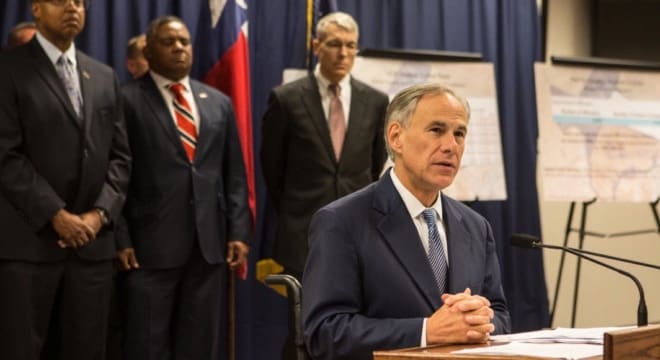 During the all-day hearing, Gov. Abbott made it clear on social media he didn’t endorse so-called red flag legislation, and would not sign a bill if he thought it limited gun rights (Photo: Abbott’s office)

In a debate sparked by the Santa Fe School shooting in the state last month, a Texas House committee held a marathon hearing on Tuesday to discuss “red flag” laws.

Termed “lethal violence protective orders” by Texas supporters, the concept of allowing those close to an individual believed to be a threat to themselves or others to ask a court to seize their guns was part of Gov. Greg Abbott’s 44-page school security plan introduced in May. Formulated after roundtable discussions following the high-profile school shooting that left 10 dead, the plan included a variety of campus security updates, and a nod to gun industry safety programs but little in the way of gun control legislation. Sponsors of LVPO’s in the Lone Star State are eager to make the most of the chance they have.

“The law would allow a person’s family members (or a police officer acting through a prosecutor) to ask a judge to temporarily remove firearms from a person’s possession if they pose an immediate danger of lethal violence to themselves or others,” said state Rep. Joe Moody, D-El Paso, who chaired the nearly 12-hour hearing in the Criminal Jurisprudence Committee this week.

Moody’s own bill on the matter, HB 866, was introduced last March– a year before the Santa Fe shooting — and has been languishing in committee. He argued that, while several states have adopted such red flag laws in recent years, his has numerous safeguards to protect the rights of those subject to the planned orders.

“This mirrors arrest and search warrants today, except we plan to include even stronger due process, with a full-blown hearing (including a mental health exam) following almost immediately after that short-term order, and of course, a right to appeal,” said Moody. “Naturally, what we’re looking at in these situations is also a mental health plan for the individual.”

Although the hearing was jammed with gun control advocates and their opposites from Second Amendment groups, it was Abbott himself that made his presence felt via social media. Pointing out that while in office he has signed numerous gun rights expansions into law, the day before the hearing the Republican fired off a Twitter broadside that included a reference to the Constitution and a warning that, “I will never sign a law that limits self-defense. My school safety plan can make schools safer w/o infringing #2A rights.”

The reason I pushed for & signed open carry & campus carry wasn’t for hunting or sport, it was to ensure Texans can DEFEND themselves. I will never sign a law that limits self defense. My school safety plan can make schools safer w/o infringing #2A rights. #txlege #tcot #guns pic.twitter.com/S9VVQcaVXq

Abbott had posted similar missives in the week leading up to the hearing.

I not only support this principle, I fought for it & won in the Heller & McDonald cases when I led state coalitions protecting the INDIVIDUAL right to keep & bear arms. You can be sure that even in my school safety plan I will not allow 2nd A rights to be infringed #txlege #tcot pic.twitter.com/nB0eXe9ZUS

The United States Constitution became the law of the land on this day 230 years ago. May the United States forever remain a Nation of laws. #WeThePeople #txlege #tcot pic.twitter.com/8G6Tfvuzwt

And during the hearing itself responded to another tweet by saying he didn’t personally advocate for red flag laws “Only that it is something the legislature can consider.”

I agree with you 110%.
I wish you’d read the plan before commenting. It specifically requires full due process before anyone’s right can be compromised. Moreover I don’t advocate red flag laws. Only that it is something the legislature can consider. #txlege #2A https://t.co/PhdUyU55Hf

In addition to the House hearings, the state Senate is expected to look into similar legislation next month.