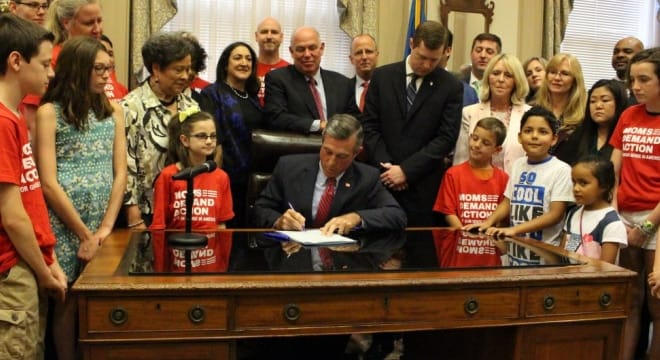 Carney signed the proposal into law this week before a crowd of gun control advocates. (Photo: Delaware Governor’s office)

Democratic Gov. John Carney on Wednesday signed legislation to set up a framework to temporarily void the gun rights of those thought to be dangerous in The First State.

The bill, HB 222, enables a family member or law enforcement to seek an emergency “Lethal Violence Protection Order” to temporarily seize the guns from someone thought to be a threat to themselves or others. The measure, termed a “red flag” law by supports, passed the legislature earlier this month without a single opposing vote.

“This new legislation is another tool to help law enforcement and our community confront gun violence,” said Carney, who has already signed a bump stock ban and other gun control bills into law so far this year. “One piece of legislation alone will not solve the problem of gun violence, but with a comprehensive approach, along with efforts to strengthen security in our schools, we can make a difference.”

Under the bill, a court may authorize an LVPO for a period of up to one year but must allow the subject of such an order to petition for a hearing to have their guns returned. While those faced with an order can voluntarily hand over their firearms to law enforcement or a gun dealer to hold, the bill also enables police to conduct a search and seizure and guarantees the agency’s immunity from civil or criminal liability for any damage to guns stored or transported, barring intentional misconduct. Those making false reports could face perjury charges.

Laws of the sort have gained traction since the adoption of AB1014 in California four years ago. That measure established a mechanism to deny firearm possession by those believed to a threat to themselves or others in the wake of the killing of six individuals — half by gunfire — near the University of California, Santa Barbara, in Isla Vista.

A like-minded program was passed by ballot referendum in Washington two years ago after a $3.5 million campaign by groups funded in large part by former New York Mayor Michael Bloomberg. Neighboring Oregon followed soon after via a hard-fought legislative process that saw no buy-in from state Republicans and a stalled repeal attempt.

Since the Parkland school shooting earlier this year — in which a 19-year-old with a history of behavioral issues killed 17 with a legally purchased rifle despite a number of potential warning signs reported to educators, police and social workers — similar laws have passed in Florida, Maryland, Vermont, and Rhode Island.

While supported by Democrats and gun control advocates, many Republicans, civil liberties organizations and Second Amendment groups pan the move to red flag laws, arguing they hamper the right to due process, may be used vindictively with little recourse, and do not provide resources for mental health treatment. The Colorado Senate rebuffed seizure law legislation in May over such concerns. In New York last week, the GOP-controlled Senate ended their session while leaving such a bill on the table despite calls from Gov. Andrew Cuomo to pass the measure.