Justice Kennedy's retirement and its impact on gun rights 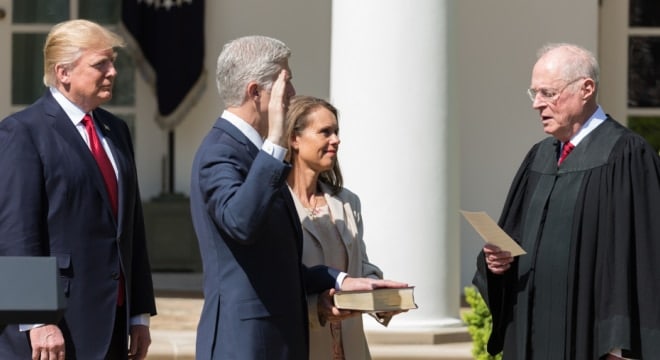 Justice Anthony Kennedy announced Wednesday that he was resigning from the U.S. Supreme Court, a move that will have big implications for the federal bench.

Kennedy, a 1988 appointee of President Reagan and a month away from his 82nd birthday, wrote President Trump this week in a brief one-page letter declaring his intention to leave the bench at the end of July. He expressed his “profound gratitude for having had the privilege to seek in each case how best to know, interpret, and defend the Constitution and the laws that must always conform to its mandates and promises.”

Kennedy, who graduated from Harvard Law in 1961 and came to the Supreme Court from the West Coast’s U.S. 9th Circuit, was pegged as a conservative, for example, in penning the ruling on Citizen’s United, an important case on election spending by corporations. He also notably swung to the left on a number of issues in a court divided nominally into five conservatives and four liberal justices, such as in his polling with the court’s left-leaning justices in Obergefell, a case concerning same-sex marriage, in which he also wrote the opinion of the majority.

When it came to gun rights cases, Kennedy supported the 5-4 decision in the 2008 Heller case as well as the follow-on 2010 McDonald challenge, which in tandem recognized an individual right to keep and bear arms both in and outside the home. However, the nation’s high court has declined to take on Second Amendment questions in the decade since then, turning away a number of robust cases to the howls of Justice Clarence Thomas who argued the 2nd was fast becoming a “disfavored right.” As four justices are needed to vote to hear a petition to the court, it was long thought by many legal scholars that Kennedy had lost his appetite for future gun litigation.

“Although we do not know who is voting for or against taking a case, it appears that only three justices currently on the Court have been voting to hear a 2A case: Thomas, Alito, Gorsuch,” said UCLA Law Professor Adam Winkler. “If they had Roberts’s vote, Thomas, Alito and Gorsuch would have four votes to take a case. So it seems clear that Roberts is not voting to decide Second Amendment cases. And the same is true for Kennedy.”

Now, with Trump’s chance at appointing his second justice to the nine-member panel, for which he said Wednesday the search is actively on, those on both sides of the aisle — and by extension, the debate on gun policy — are girding for a fight.

The Brady Campaign, Everytown and Giffords all rushed to make statements promising to do what they could to throw roadblocks up for any proposed replacement for Kennedy who could be seen as pro-gun.

“We fully expect the gun lobby will push for a nominee inclined to restrict public officials’ ability to pass common-sense gun laws, but Americans will not stand idly by any attempt to use this nomination to undermine public safety,” said Eric Tirschwell, Everytown’s litigation director.

Gun rights groups, to include the National Rifle Association and Second Amendment Foundation, argued the time is right to swap out the swing vote with a jurist who was more of a constitutionalist.

“Gun owners must make sure that President Trump and the U. S. Senate nominate and confirm a Supreme Court Judge that truly respects the Second Amendment,” SAF Founder Alan Gottlieb told Guns.com. “The gun prohibitionists will do everything in their power to derail a pro-gun rights nominee.”

On Capitol Hill, Senate Majority Leader Mitch McConnell, the chamber’s top Republican, promised on Wednesday there would be a vote in the fall whereas his opposite, Minority Leader Chuck Schumer urged the body not to consider a Supreme Court justice in an election year, the latter echoing the same 2016 call made by Republicans prior to the upcoming presidential election.

Leonard Leo, an outspoken longtime leader of the Federalist Society who actively worked on the nomination of Neil Gorsuch to replace the late Justice Antonin Scalia and has been characterized as “Trump’s Supreme Court whisperer” said last week that the President’s current list of choices — about 25 potential nominees — were considered among the “best and brightest.” Leo went on to say that, should Trump have a chance to fill another spot in the court, it would be a “fundamental transformation in the federal bench.”

Elections matter! Thank you again to all #NRA members who got out and voted in 2016. Because of you, @realDonaldTrump is appointing the replacement to Justice #Kennedy who was the deciding vote in DC v. Heller. #ThankYou #2A #SCOTUS ​ https://t.co/nw3kTegdyB