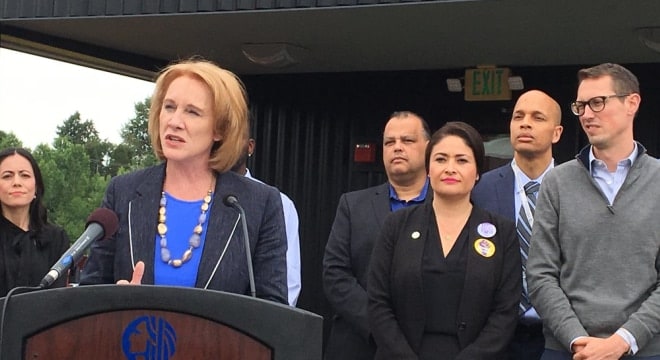 Leaders in Washington’s largest city are moving forward with a plan to mandate safe gun storage and penalize those who fail to report lost or stolen guns.

On Wednesday, the Seattle City Council’s Gender Equity, Safe Communities, New Americans, and Education Committee approved the proposed gun control ordinance, setting it up for a vote by the full council. Introduced by Mayor Jenny Durkan in May, she argued that most gun owners in the city do not store their firearms safely.

“The level of gun violence in our communities is just not normal. While we can’t prevent every gun tragedy, we can act to save lives,” said Durkan, a Democrat. “We know that unsecured, unsafely stored guns help fuel this crisis of violence because they are more likely to cause tragic accidents, fall into the wrong hands, or be used in suicides. Requiring that gun owners safely store their guns can help make our communities safer places to live.”

Durkan’s ordinance, proposed with input from City Attorney Pete Holmes, Councilmember M. Lorena González and “safety advocates” from the Brady Campaign and Moms Demand Action, would establish a range of civil fines between $500 and $10,000 for those who leave unsecured firearms in areas where minors or those considered “at risk” may find them.

Additionally, it would require those who find that they have lost a gun or had one stolen to notify police within 24 hours. Failure to make a report would result in fines of up to $1,000.

According to Durkan’s office, the Seattle police logged reports of 250 stolen guns last year, and in a recent survey some 150,000 gun owners in surrounding King County reported they did not lock up their guns.

The nine-member Seattle City Council, set to take up the proposal in coming weeks, is made up of eight Democrats and Kshama Sawant, a declared member of the Socialist Alternative party.