Checks up, estimated sales down in semiannual review of NICS 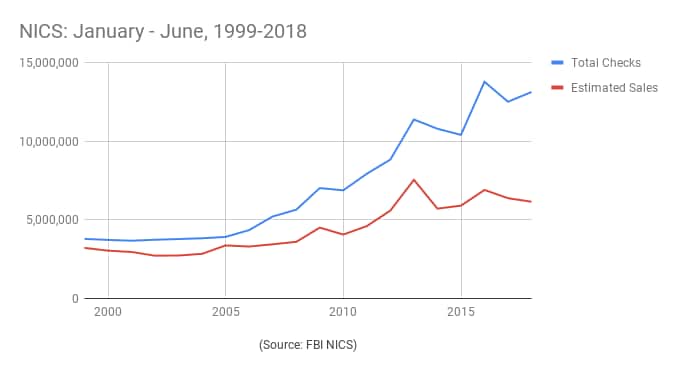 Federal background checks for gun sales took few surprising turns in the first six months of 2018, though it appears the year remains on track to become the second busiest in FBI history.

The agency processed 13.1 million applications through the National Instant Criminal Background Check System between Jan. 1 and June 30, according to federal data — landing 5 percent ahead of 2017 and 5 percent behind 2016, the busiest year on record.

Background checks serve as a proxy measure for gun sales, however, the measurement isn’t perfect. Applications for concealed carry permits, periodic rechecks for maintaining licenses and a slew of smaller categories for pawns,  redemptions, rentals and other rare situations undercut the total amount of checks processed in one month.

These types of background checks have consumed larger percentages of the total amount recorded each month since the banner year of 2016, federal data shows. So far in 2018, these administrative-type checks have inflated monthly totals, but haven’t translated into boosted sales.

Guns.com estimates sales through the first half of the year exceeded 6.1 million, a 3.5 percent decline over 2017.

Despite the slump, the industry set new a record in the spring after a wave of gun control debate swept Capitol Hill in the wake of the Parkland massacre. The week of Feb. 26 through March 4 now ranks the eighth busiest week in FBI history with 695,503 applications processed. It’s the same week a few major banks and half a dozen corporations — including Dick’s Sporting Goods, Walmart, Kroger and L.L. Bean — announced changes to their firearm policies in the absence of congressional action.

It remains unclear how the rest of 2018 will unfold for the gun industry as major manufacturers signal cautious optimism and “a return to growth” sometime next year.