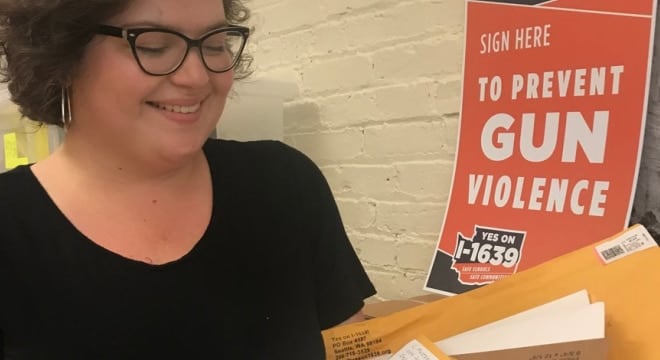 The Alliance for Gun Responsibility has been collecting signatures over the past several weeks across the state but now a legal challenge has been filed over the petitions used in the process. (Photo: AGR)

As supporters of I-1639 have nearly completed their signature drive to put a list of gun restrictions in front of voters in the Fall, Second Amendment groups have filed legal challenges.

The 30-page ballot referendum, backed by the Alliance for Gun Responsibility, would mandate new guidelines for semi-auto rifles under state law including fees, training requirements, waiting periods and additional background checks going beyond federal guidelines. However, the group now faces a lawsuit filed in the Washington State Supreme Court over the very petitions used to gather some 260,000 signatures to get the initiative certified by state officials.

“We publicly warned the initiative sponsors about these problems and they ignored us,” said Alan Gottlieb, founder of the Second Amendment Foundation, one of the gun rights groups behind the challenge. “We are now taking the issue to the state high court to seek a declaratory judgment and injunction.”

According to court documents asking the Washington Secretary of State to invalidate I-1639, the petitions circulated by paid canvassing groups working for AGR failed to meet state requirements for readability and did not contain a correct copy of the printed measure — which Gottlieb characterized as using “microscopic” text. Two weeks prior to filing the legal action, SAF contacted the referendum’s backers over the language without result.

“During the signature gathering process, we were contacted by several people who were alarmed at the unreadability of the text, and also because they could not really tell what changes they were being asked to make to existing law,” said Gottlieb.

The initiative covers a lot of ground when it comes to changing the state’s gun statutes. I-1639 as proposed would set a definition under Washington law of an “assault rifle” simply as any that “utilizes a portion of the energy of a firing cartridge to extract the fired cartridge case and chamber the next round, and which requires a separate pull of the trigger to fire each cartridge,” which would effectively regulate all semi-auto longarms other than shotguns. The new requirements proposed alongside the definition would bar sales to those under 21 altogether.

To be eligible for an assault rifle under the plan, candidates would have to pass an enhanced background check, show proof of completing a safety training course within the last five years, pay up to a $25 fee, and wait at least 10 days before picking up the gun from a dealer. There would be no exception to those who already have a concealed carry permit or have legally purchased a rifle before.

In addition, gun shops would be required to both submit the information on the sale to the state and inform potential buyers of the increased risk of “injury, death by suicide, domestic violence and homicide,” due to having a firearm. Meanwhile, the Washington Department of Licensing would be tasked with keeping a running tab on registered assault rifle owners to make sure they remain eligible to possess the firearm. Finally, gun owners would be required to secure their firearms or risk “community endangerment” charges.

While I-1639 backers have enjoyed big donations from high-profile billionaires– Microsoft co-founder Paul Allen and venture capitalist Nick Hanauer both chipped in $1 million each– it has also attracted attention from Second Amendment groups who have previously filed suit over the proposed ballot title in May and set up a “No on I-1639” campaign.

The Alliance for Gun Responsibility is the past was able to get I-594, an expanded background check initiative, approved by voters in 2014, followed by I-1491, a measure to make it easier to temporarily seize guns from individuals seen as being at risk, in 2016.