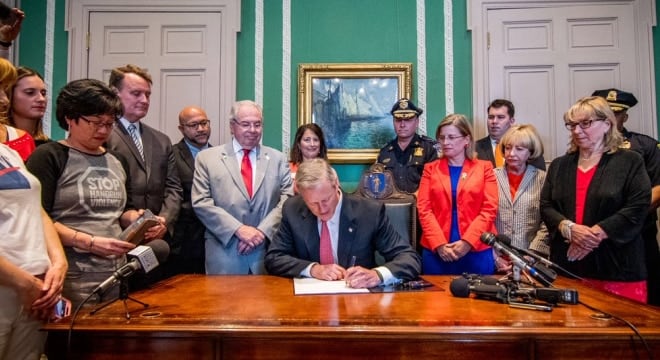 Baker signed the proposal into law this week before a crowd of lawmakers and representatives from gun control organizations. (Photo: Massachusetts Governor’s office)

Massachusetts Gov. Charlie Baker signed a so-called “red flag” bill into law on Tuesday to allow the temporary seizure of firearms from those thought to be at risk to themselves or others.

The proposal, H.4539, was popular with state lawmakers in the Democrat-heavy legislature despite calls from some that it was both cruel and dangerous. The new law allows current and former romantic partners, family, roommates, and police to seek an extreme risk protection order, suspending someone’s gun rights and firearm license for up to a year.

“Massachusetts’ gun laws are a model for the nation, and creating an additional pathway to keep guns away from people unfit to possess them will make our laws even stronger,” said Baker. “This law creates a responsible way to help prevent gun deaths and suicides while protecting individuals’ second amendment rights.”

The ERPO law allows family members or law enforcement to ask the courts to remove access to guns, ammunition, firearm ID cards, or licenses to carry a firearm from an individual thought to be at risk. Once issued, the order would be transmitted to federal agencies to bar future gun sales or transfers through licensed dealers. The order would last for up to one year with the option open to discontinue to renew.

Since the Parkland school shooting earlier this year — in which a 19-year-old with a history of behavioral issues killed 17 with a legally purchased rifle despite a number of potential warning signs reported to educators, police and social workers — similar laws have passed in Delaware, Florida, Maryland, Vermont, and Rhode Island.

Backed by a collection of state and national gun control groups, the Brady Campaign, Everytown and Giffords were quick to release almost mechanical statements applauding Baker’s actions. The organizations argued that other jurisdictions that have adopted similar laws have saved lives, helped prevent suicides, and given police an additional tool to combat possible tragedy.

Terming the Republican governor “Anti-Freedom Baker” the Gun Owners’ Action League had long criticized the ERPO bill over a host of due process concerns and the fact that it only legalized stun guns in the state by limiting them to those with carry permits.

Anti Freedom Baker. Reminder, in addition to signing a bill which revokes due process only for licensed gun owners, Governor Baker will also be authorizing regulation of stun guns. These are sold over the counter in a vast majority of country w/no issues. pic.twitter.com/lEI7mZORbH