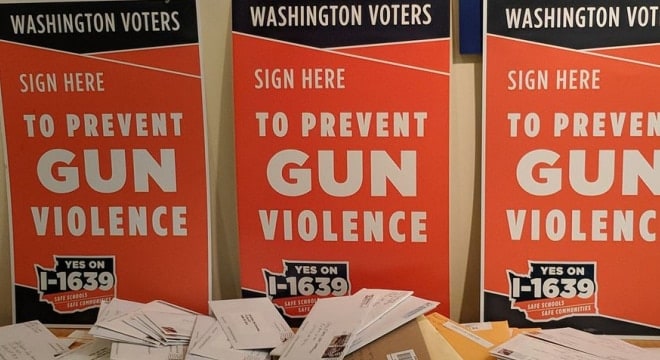 The Washington Supreme Court quickly swatted away a challenge from gun rights groups over the legality of petitions used to collect signatures for a planned anti-gun voter referendum.

Court Commissioner Michael Johnston on Tuesday denied a motion filed last week by Second Amendment groups seeking to contest the petitions used by organizers of I-1639. Johnson came to the conclusion that the gun rights organizations didn’t have legal standing to challenge the initiative during the petition process, and the court could not force Secretary of State Kim Wyman to invalidate the current signatures gathered.

“[O]pponents to an initiative have no constitutional or statutory basis to impede the proponents’ exercise of their right of petition,” said Johnston. “The opponents’ interests in this matter are protected by their constitutional right to express opposition to the initiative, including urging voters to reject it at the poll.”

In response, opponents to I-1639 are urging gun owners to reach out to Wyman’s office, asking her to follow state law and reject any illegal or faulty petitions. They argue the petitions failed to meet requirements for readability and did not contain a correct copy of the printed measure.

“Everyone must follow the law, even lobbying groups and signature gatherers funded by billionaires and other wealthy elitists,” notes the opponents, referencing $2 million in donations to the I-1639 campaign from Microsoft co-founder Paul Allen and venture capitalist Nick Hanauer. “Firearms owners are expected to fully comply with laws, and that principle must apply to initiative sponsors and the laws that guide ballot initiatives and signature gathering.”

The Seattle Times reported, the Alliance for Gun Responsibility plans to turn in some 360,000 signatures this week to meet the 259,622 needed to pass muster by Wyman in order to put the measure on the ballot in November. The initiative seeks new regulations for semi-auto rifles under state law including fees, training requirements, waiting periods and additional background checks going beyond federal guidelines.