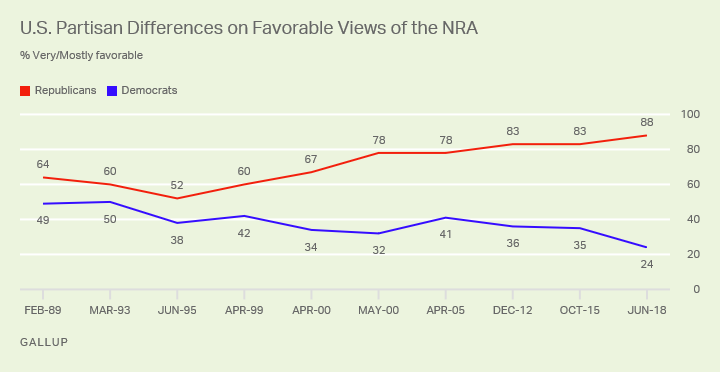 The partisan divide among Americans’ views of the National Rifle Association grew further apart this year, according to a recent survey.

Gallup polled more than 1,500 adults last month and found nearly nine in 10 identified Republicans held favorable views of the NRA versus just 24 percent of Democrats. The 64-point spread grew by one-third since the last time Gallup asked in October 2015. Since the organization first posed the question 29 years ago, the gap between Republican and Democrat has quadrupled.

The most recent 11-point drop in Democrats’ views, however, “may reflect a variety of factors,” pollsters said. “Including substantial support among Democratic leaders for tougher gun control legislation after a series of high-profile mass shootings in the past few years,” said RJ Reinhart in an analysis of survey results. “In particular, efforts by survivors of the February 2018 shooting at Marjory Stoneman Douglas High School in Parkland, Florida, to put pressure on Congress to pass new gun control laws may be affecting U.S. Democrats’ opinions of the NRA.” 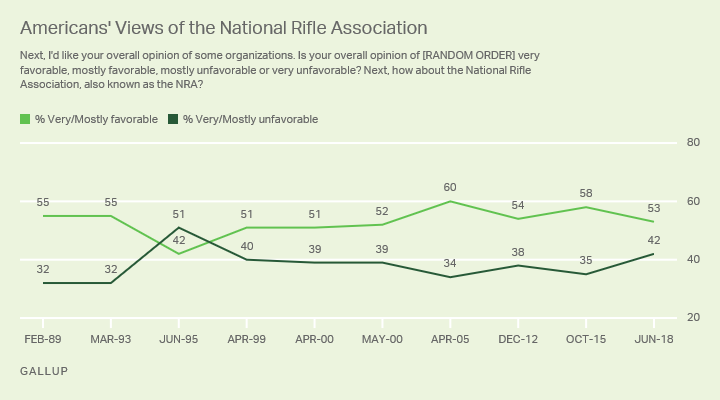 Among all Americans, favorable views of the NRA declined, down five points over the last three years to just 53 percent. In nine of the 10 years Gallup polled for views on the organization, a majority of respondents viewed the organization positively. Only in June 1995, Reinhart noted, did a majority of Americans dislike the NRA — notably the year after Congress passed an “assault weapons ban.”

Reinhart said the survey results confirm just one more issue of the country’s growing partisan divide — gun control. “The large partisan gap may be turning support for the NRA — and by extension, gun control legislation — into a litmus test for candidates from the two parties,” he said. “Given the high percentage of Republicans who view the NRA favorably, it may be extremely difficult for a GOP candidate who opposes the group to win a primary election. Likewise, a pro-NRA Democrat may have trouble emerging from a primary to run in a general election.”