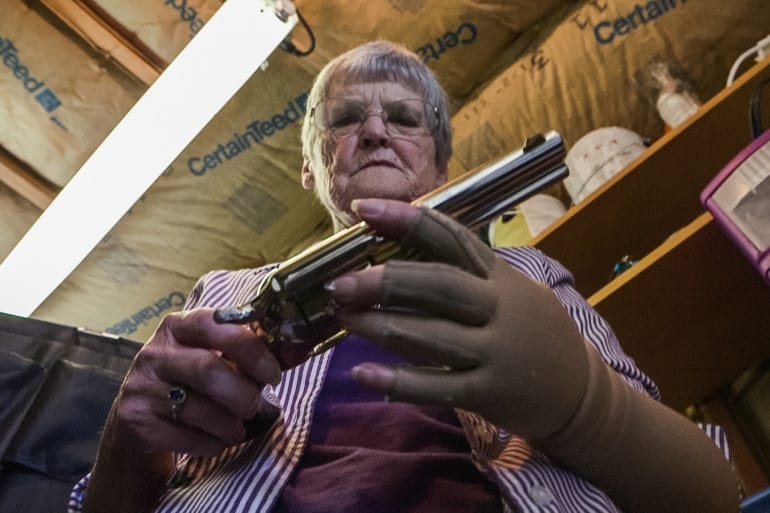 Dee Hill examines the last of the guns that once belonged to her husband, Darrell Hill, a retired cop who accidentally shot her in the stomach shortly before his death in 2016. (Photo: Frank Carlson/PBS NewsHour)

Researchers at the University of Colorado raised concerns last week over dementia patients’ access to firearms.

Dr. Emmy Betz, associate research director for the university’s School of Medicine, estimates as an increasing number of Americans turn 65, the prevalence of dementia will nearly triple by 2050. So, too, would senior gun-owners diagnosed with the disease, reaching somewhere between 8 million and 12 million over the next three decades.

“You can’t just pretend it’s not going to come up,” Betz told PBS NewsHour last week. “It’s going to be an issue.”

PBS partnered with Kaiser Health News to investigate the intersection of dementia and gun ownership, finding more than 100 cases involving seniors who shot themselves or others as their health and mental state declined.

Suicides comprised the vast majority of instances found in news reports, hospital data and public death records since 2012. Another 15 cases were classified as homicides, the investigation discovered. Many acted during a bout of confusion or paranoia, often shooting caretakers, spouses or children — and very few were found competent to stand trial, according to the report.

About one-third of patients will display combative behavior, according to the Alzheimer’s Association, putting caregivers at risk.

For Dee Hill, her late husband Darrell’s fast-progressing form of dementia meant he didn’t understand he’d accidentally shot her one day in May 2015.  She told PBS she’d safely stored her husband’s guns — acquired from decades as a police chief and county sheriff in Oregon — in a vault located in the couple’s carport, but allowed him to view the collection often.

“He was just almost obsessive about seeing his guns,” she said.  “My concern [had been] that someone was going to get hurt. I didn’t in my wildest dreams think it was going to be me.”

Hill said her husband accidentally fired a Glock handgun into her stomach after picking it up from the floor where it had fallen moments before. She said she never once considered pressing charges. “I didn’t want anyone to think it was intentional. Nobody would have believed it anyway,” she said.

Researchers, like Betz and others, suggest discussing options for removing firearms soon after a diagnosis is received. One method, referred to as setting a “firearm retirement date,” allows for gun owners to designate a trusted caregiver or family member to take the guns away as cognitive impairment advances. Other simpler approaches suggest storing guns unloaded or filled with blanks so as not cause harm.

Dr. Arthur Przebinda, of Doctors for Responsible Gun Ownership, criticized researchers for conflating gun rights and dementia in an interview with PBS last week, calling it a “bloody shirt-waving tactic that’s used to stir emotions to advance support for a particular policy endpoint.”

“I’m not disputing the case that it happens. I know it can happen,” Przebinda said. “My question is how prevalent it is, because the data is what should be driving our policy discussion, not fear or fear-mongering. It’s bad science.”