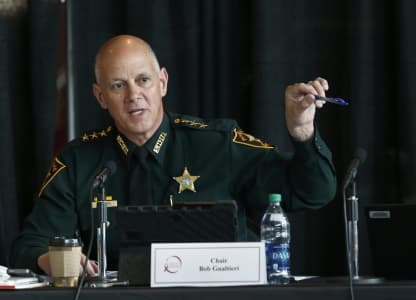 Officials reviewing the Parkland massacre described the alleged suspect’s late mother as an “enabler” who thwarted attempts to help her troubled son, according to a report by the Associated Press this week.

Gualtieri said Lynda Cruz told counselors she didn’t care if her son owned guns, including the AR-15 rifle used in the Valentine’s Day attack. Officials made more than 140 contacts with the Cruz family over the years, though it remains unclear exactly how the mother — who died in November after a bout of pneumonia — derailed her son’s treatment.

Earlier reports indicate district officials transferred Cruz out of a school for behaviorally troubled students and into Stoneman Douglas in January 2016, despite concerns over his readiness for such a change. He was later expelled from the school after several disciplinary actions.

The 16-member commission, assembled by Florida Gov. Rick Scott, will discuss Nikolas Cruz’s mental health treatment in a closed session Thursday, according to the AP, as it compiles a report on the massacre — including recommendations for safety improvements — ahead of the Jan. 1, 2019 deadline.

“Everyone is going to find out just how much incompetency there was and it led to my daughter and the other 16 victims being murdered,” said Andrew Pollack — who lost his 18-year-old daughter, Meadow, in the attack — during its first meeting in April. Pollack sits on the commission with Ryan Petty, father of Alaina Petty, and Max Schachter, father of Alex Schachter. “I want everyone in Broward to know what happened,” he added.