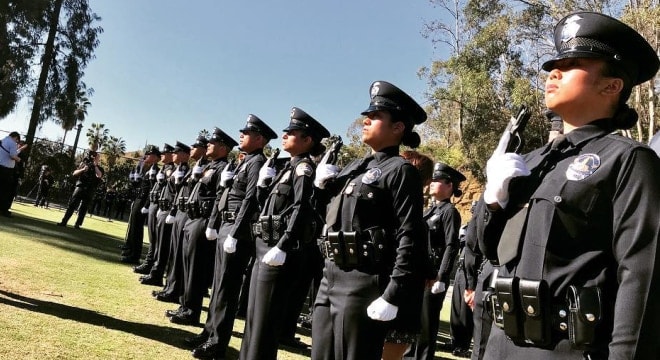 The Los Angeles Police Department has the largest reserve officer unit in the state. (Photo: LAPD)

Gov. Jerry Brown signed a bill into law Monday that allows retired reserve officers in the state to keep magazines that are deemed “large capacity” and banned from civilian ownership.

The measure, AB 1192, passed the legislature last month by wide margins. The bill was sponsored by Republican Assemblyman Tom Lackey of Palmdale, a 28-year veteran of the California Highway Patrol, and Brown signed it without comment.

Under current state law, retired peace officers have a carve-out from California’s ban on detachable firearm magazines capable of holding more than 10 rounds. Since July 2017, even formerly grandfathered large capacity magazines were outlawed except for the carve-out, a move that generated a lawsuit from gun rights groups.

Lackey’s proposal stretched the exemption to include former part-time or volunteer deputies and police officers defined as a “Level I reserve peace officer” with at least 10 years of experience. The Los Angeles Police Department, which boasts the largest reserve force in the state, requires Level I officers to complete almost 400 hours of classroom training and contribute about 16 hours per month in addition to mandatory monthly meetings.

The bill was endorsed by the California Reserve Peace Officers Association, an organization with considerable political clout. According to the state’s officer standards commission, over 600 law enforcement agencies currently employ some 6,200 reserve officers across California.

Brandon Combs with the Firearms Policy Coalition told Guns.com that AB 1192 gives “extra-special gun rights” to a select few while stepping on law-abiding gun owners who are denied possession of similar magazines for self-defense. “The fact that the bill was brought by a Republican and passed by anti-gun Democrats says everything one needs to know about how deep the Sacramento swamp really goes,” said Combs.

Further, Combs has concerns that the carve-out fails to pass constitutional muster, holding that it likely violates equal protection rights under both the state and federal constitutions as well as making potentially illegal changes to Prop. 63 gun control laws approved by voters in 2016.

“There is no rational, let alone compelling, basis to treat retired government employees differently than law-abiding California gun owners,” said Combs. “Even if AB 1192 is constitutional, it’s still bad policy to pass elitist legislation that drives a wedge between law-abiding taxpayers and the ‘more-special’ people who work for them. AB 1192 is an awful bill tells the people of California that the only way to have any real Second Amendment rights is to be a government worker.”