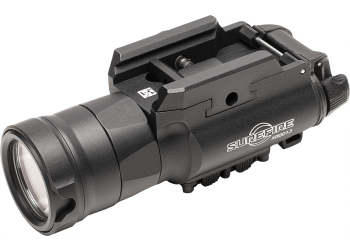 SureFire announced the launch of a new 1,000 lumen weaponlight, introducing consumers to the XH30.

Featuring a recoil-proof LED, the XH30 offers a Total Internal Reflection lens which delivers a high-intensity beam. Boasting two mode selector switches, one switch moves between 1,000 and 300 lumens while the second switch allows users to change between continuous light operation and strobe mode.

The light is activated using an ambidextrous switch placed at the rear of the light’s body. SureFire also provides optional DG grip switches for easier one-handed activation without altering the shooter’s grip.

“This powerful and versatile XH30 WeaponLight was created to interface with SureFire’s revolutionary Masterfire Rapid Deploy Holster,” SureFire said in a news release. “It features a unique bezel with cam slots, and pin slots on both sides of the body, which serve to lock the light into the holster and secure the weapon at an advantageous angle for quick deployment.”