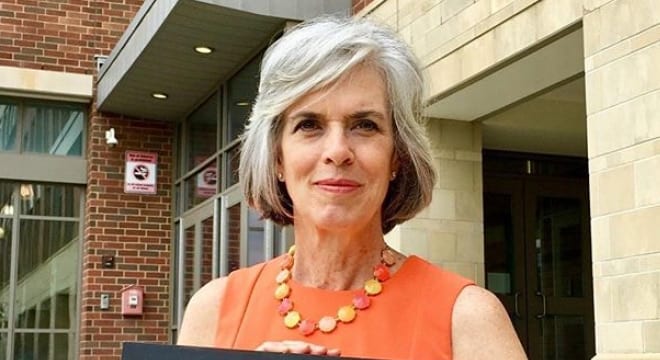 Rep. Katherine Clark, shown participating in a Wear Orange campaign in conjunction with Everytown, argues those with a history of abusing animals should lose their Second Amendment rights for good (Photo: Clark’s Office)

A group of Democrats in the U.S. House have introduced a bill to bar Second Amendment rights to those with a past history of animal abuse.

The measure, termed the Animal Violence Exposes Real Threat of Future Gun Violence, or AVERT Act, is backed by lawmakers from California, Massachusetts and New York. Under its guidelines, the bill seeks to prohibit those with a misdemeanor conviction for animal cruelty from possessing guns, ammo or firearm licenses.

“There is a well-documented link between animal abuse and future violence,” said U.S. Rep. Katherine Clark, D-Mass. “From Columbine to Parkland to Sutherland Springs, these perpetrators of mass gun violence had a history of animal abuse, and addressing this pattern of behavior is part of the solution when it comes to preventing gun violence and saving lives.”

The bill, filed as H.R.6278, would make a misdemeanor charge under Federal, State, or tribal law of a crime involving abuse to or neglect of an animal a conviction that would trigger a lifetime ban on gun possession. Those with previous convictions that had been expunged or set aside, could be allowed to have their gun rights restored.

Currently, legislation similar to Clark’s was proposed this year in New Jersey while other states such as California and Illinois have seen their own attempts at producing laws to link minor animal cruelty or neglect charges to gun rights. An online petition organized by animal rights groups started earlier this year urging Congress to ban gun ownership for animal abusers has just over 250,000 signatures.

Clark’s bill has been referred to the Republican-controlled House Committee on the Judiciary.