A trigger for the CZ Scorpion Evo 3 is soon to roll out the doors of Franklin Armory as the company announced it’s currently taking pre-orders on the new BFSIII CZ-C1 binary trigger.

Franklin Armory hinted at the BFSIII CZ-C1 binary trigger a few months ago, featuring a countdown on its website. On July 4, that countdown ran out and the first batch of BFSIII CZ-C1 triggers became available for pre-order with an expected yet ambiguous ship date of early September. 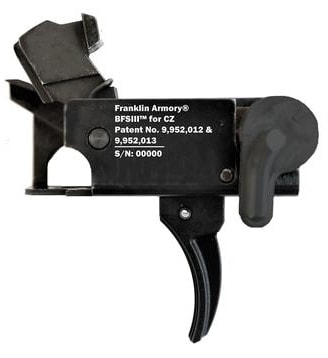 The trigger will start shipping in September. (Photo: Franklin Armory)

“The BFSIII provides greatly reduced split times between rounds and the ability to place two separate shots into a tighter group,” Franklin Armory said in a statement.