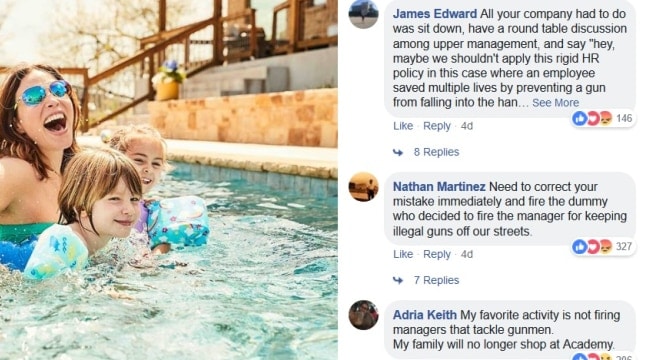 Academy Sports have seen their social media pages flooded with angry comments since the firing of an assistant manager who tackled a suspected gun thief. (Photo: Screenshot)

A Florida man canned by the big box retailer has accepted an offer to come back to work following a public backlash over his termination.

In an update to a previous story reported by Guns.com, Dean Crouch, 32, was an assistant manager of a Tallahassee-area Academy Sports location but was let go from his position after he tackled a man who swiped a Glock from the store. Now, as detailed by the Tallahassee Democrat, he will soon be going back to work.

“I am pleased to report that the head of Academy Sports + Outdoors stores spoke with Mr. Crouch and offered him his job back and Mr. Crouch accepted,” said his attorney, Ryan Hobbs.

Crouch stopped Jason White, 24, after he abruptly left the gun counter with a handgun he was looking at without paying for it. Also included in a backpack that White took from the shelf was ammunition and two spare magazines. Police took the man into custody and, linking him to a similar theft of two additional pistols earlier the same day from a local pawn shop, charged him with a host of felonies under state law. He has since been released on bond.

As news of the manager’s firing went viral, Academy’s social media accounts have been swamped with negative feedback, calls for boycotts, and demands to reinstate Crouch.

Since the incident, Crouch told media that he had to put his home up for sale, was getting little sleep, and was shopping around for another job in the meantime. In the below video from WJXT, which aired prior to the news he was rehired by Academy, Crouch explains that he was fired because he violated company policy by physically contacting White.